It’s 730am and we’re discussing the day ahead over breakfast. Which cave shall we visit? We flip through brochures and research online. Hang En Cave, the third largest in the world, is reached by a five kilometre trek through the jungle. Cool. The guy who books tours through our hotel tells us it takes two to three hours to hike in, although you must have a tour guide with you. Not only is it impossible to find the trail without a guides help, but it’s also illegal to wander through the national park on your own. Phong Nha-Ke Bang National Park has one of the highest concentrations of unexploded ordinance (bombs) in the world. It is a UNESCO World Heritage Site and is home to major biodiversity; over three hundred caves and grottoes and wild animals such as tigers, elephants, eighty species of amphibians, three hundred species of birds and a whole whack of other cool animals and bugs.
Sounds like an adventure! But to be honest, the whole paying-someone-to-walk-us-through-the-jungle thing isn’t very appealing. We search online for a map that will tell us where the trailhead is that leads to Hang En, but the internet is devoid of clues, hints, and the like. Really? No one spilled the beans?
I ask the booking guy where the cave is. His finger lands somewhere in the middle of Phong Nha park on our little tourist map print out. I ask where the trail is. He points to a spot along a wiggly line, roughly halfway between two other wiggly lines (roads), which is a fifteen kilometre stretch. This is all the direction we get, and all we need.
So we pack a couple bottles of water, some Asian peanut wafer things and get on our bikes. We follow the road through the massive landscape of mountains and see mini cave openings up a steep cliff just off the shoulder. What the heck. Let’s check out one of these.
We park our bikes on the road and climb the cliff, over loose skree until we reach the opening of a little cave that circles around and comes out again twenty feet from the first entrance.
Woo.
Okay. Time to look for a big fucking cave.
Once on the “right” road, the one that supposedly has the trail leading to Hang En, we slow our bikes down.
“We should look for garbage,” Flo says.
Makes sense. The bus drivers would probably be throwing cigarette butts out the window while they wait to pick up tour groups from the trailhead.
BINGO. Flo, ya genius. About seven kilometres along appears a random trash can on the side of the road and on the other, a couple ‘No Fire’ signs posted on a tree. A rock face that disappears into the jungle looks worn. This is so it.
We drive our bikes a short distance down the road and take a sharp turn into the brush, rolling through foliage and parking them behind a tree. From the road, they are barely visible.

We walk back to the supposed trail, following it straight up the mountainside. Oh yeah, this is definitely it.
It drops quickly on the other side, heading down steadily for the next hour. Down a muddy path, through openings in banana plants and then under dark forest umbrella, over and under fallen giants and along an almost-dry river bed of slippery rocks. It is very narrow, and our hiking sticks intercept the multitude of spiderwebs only half the time, our faces the other half.
A fork in the trail! Which one to Hang En? I lead us left, where the foliage drops low until our heads are above the canopy, and we can see the sea of jungle that encompasses us. Mesmerizing. It’s like a floating carpet of leaves and vines dripping from the top of trees, flowing like green lava in rolling waves all around us.
There are red markings on the trees and the path is easy to follow, but the terrain itself is challenging all the way down the mountain until it flattens out and just feels like a walk in the woods. Cruisin’ through the jungle! Vines snake around boulders and twirl in front of our faces, taunting us to grab hold and swing through instead of merely walk. Tarzan and Jane, at your service.
Nah, the forest has us floored as we stroll past the rocky face of a mountain, crevices splitting it, creating little grottoes along the way. This is cave country, Batman.
A muddy trench appears and we balance along a fallen log until we see something glint up ahead. WATER! The trench opens to a stunning aquamarine river that has to be the result of food colouring. We cross it over a dirt-caked tree to the other shore of soft white sand. Clouds of black butterflies with long tails float around us like in a fairy tale. Sun splashes off the wings of swirling orange and yellow Kaleidescopes. The Lepidoptera Tornado Belt.
Trees gnarl around the movie-set like boulders rising from the water. We curve with the river until we’re stopped by a sight that loosens our jaws to the floor.
The Cave. Its elongated mouth gapes down at us, wet stalagmites rising like a spit-covered underbite. It’s as though a skyscraper exploded inside a mountain. The green-blue water rushes inside, white sand frames the walls and stalactites drip from its vaulted ceiling. Swirly green trees bend softly towards the entrance, urging us forward.
We have reached Valhalla.
Inside, sun rays shoot across the top half of the cave and melt into blackness somewhere far away. We duck under a boulder and come around, jumping from a sharp rock over water to a mound of sandy land. The water pools infront of us, it’s other edge farther than a stone’s throw away. It’s too deep to walk through and craggy rock walls overhang on both sides. It’s time to swim. But we both have bags, and will have to hold them above our heads. I notice the rock walls have suitable hand holds, and they dip below the water and out at an angle that could be carefully walked on. I hold my bag above my shoulder and creep horizontally along the side until the water becomes waist-deep and I can walk through. The beach stretches out before us and we follow it until we see an endless mound of boulders stretching out into the darkness. With our shoes back on, we climb half-naked up over rocks the size of small houses, jumping from roof to roof like alleycats. I hold my little flashlight between my teeth so I have two free hands to climb forward.
For forty-five minutes we venture deeper into the cave, the massive entrance diminishing to the size of a coin at our backs.

The river has narrowed and echoes around the crevices, making it sound like we have company in high and hidden places. Atop the largest boulder, we rest on it’s ridge of sparkling crystalized rock, or whatever magical stone this is. Twenty feet below, the river has turned into yet another pool, dark and deep and without craggy edges to hold onto. Across the water the cave narrows and becomes black. Our lights don’t reach that far. It’s definitely a swim away, into the unknown.
It’s three in the afternoon. We still have to climb back out of here and take the trail back through the jungle before the sun sets.
I guess this is where we turn back.
We escape the dripping jaws of the mountain and into late sunshine that sparkles on the magical blue river. 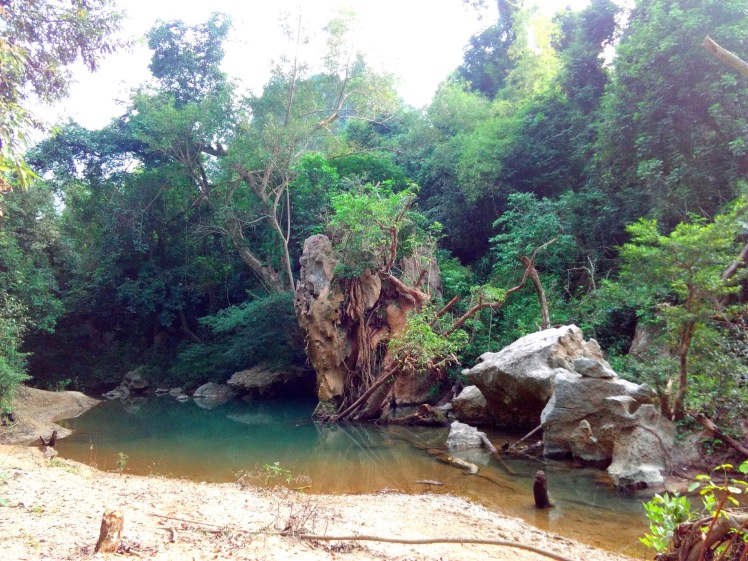 I swim in a lagoon that must have been where nymphs bathed in far-gone days, and we put our shoes on and hike through the darkening jungle, up and up and up where it was once down down down. At the rocky face near the beginning of the trail, we hear voices below. We fetch our hidden helmets from under the palm leaves and burst out onto the road–sweaty, damp and scratched–into the midst of a tour group waiting for their bus.
“Hey guys!” We’re beaming.
They stare. Silence falls as we walk past them and disappear down the road from sight. Laughing, we cross the pavement and into the jungle. We drive our motorcycles from the thick brush and rip back on the bumpy road, then speed along an unfinished sidewalk, zigzagging between six-foot deep holes that lay every few metres.
We’re back in town! Flo’s battery dies. We spend a frustrating couple of hours at the mechanics who likely caused it’s dysfunction by tinkering with it the day before.
We hit up Bamboo again for more incredible food, wondering, was that Hang En Cave? Did we boulder-hop through the third largest cave in the world? Or did we just stumble upon one of Phong Nha’s three hundred grottoes that dot the landscape? Our curious minds wander until taking a hike into Dreamland at 1030pm, when we zonk out on our pillows.

2 thoughts on “Through the Bomb-Infested Jungle, We Reach Valhalla”