A hangover meets me for breakfast at 630am. Breakfast is comprised of bananas dipped in chocolate sauce. The chocolate sauce is in a mug. This does not upset me.
An attempt at extending my Vietnam visa via the consulate to save money proves fruitless. Foreigners need to be “sponsored” by a travel agent (my nose tingles with a whiff o’ money scam). The visa extension will give us a few extra days to sell our beloved Hondas, which require a little tune up at the mechanic before the motorized baton can be morally passed on.
Hanoi is home to seven and a half million people and approximately four million motorbikes. It is an anomaly, then, that after driving around the downtown area for over an hour, we come across a total of zero mechanics. Over a course of 1600km through Vietnam, mechanics could be found at every corner in every city. Why the elusive game, Hanoi? We break for a bite, weary from the failures of the day. Taking breaks is pivotal in making you more productive at whatever task is at hand, and it holds true here. We get back on our bikes, turn a corner and a mechanic appears. Ta-da!
Minor adjustments are made; food is inhaled by the lake; my visa is extended for seven days at a travel agency. When it rains, it pours. We pick up our laundry and watch a kid hock loogies at a trail of ants climbing up the wall.
Back at the hostel I face dive into my pillow and come up for air three hours later with the energy to stuff Vietnamese BBQ in my face and enough left over to bicker with our server for overcharging us.
Flo and I head to a live music bar we’d noticed earlier and sit in a couple chairs next to the performers.

The first singer warbles our heartstrings. The second singer tickles our need to leave. When we arrive at Hanoi Rocks, I could be found sinking the eight-ball in a round of pool (Dayna: two, Flo: too many) before falling asleep to the snoring choir of my dorm.

Nine am! Quite the sleep in. After another free breakfast at Hanoi Rocks, we sit on the fifth floor balcony perfecting our two piece band version of ‘Backstreets Back’. 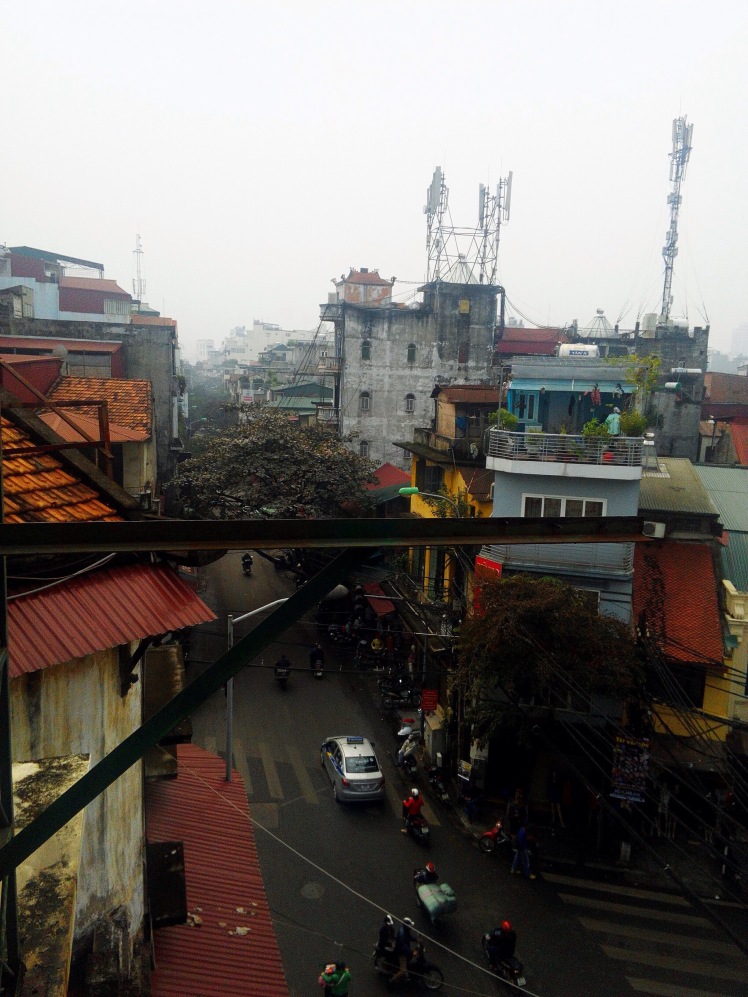 We shower, then hit the street and turn the corner to where we parked our bikes last night. Gone. The guy working at the store in front of which we parked says we should go to the police, because it’s likely they took them. Half a block away, conveniently, is the police station. We figure our hostel staff will have some ideas on how best to deal with the situation of Our Missing Bikes.
This is a smart decision. The girl at reception speaks German, English, and Vietnamese, almost all fluently. The police here tend to do business according to their mood, apparently. They may fine us twenty dollars; they may give our bikes back with not so much as a tsk tsk. She walks with us to the cop shop, laughing when we tell her we parked our bikes overnight on the sidewalk. This is apparently a big no-no in Hanoi.
After a five minute back and forth with the local police, our dear receptionist translates to us that they impounded them last night, but someone from our hostel had seen the bikes, recognized that they belonged to travelers from Hanoi Rocks and brought them back to the hostel. Flo and I look at each other. What? Who in the world recognized our bikes? Who was kind enough to wheel them all the way back to our hostel so that we didn’t have to pay a fee? The three of us return to Hanoi Rocks, speak with an employee, and there, out back, sit our two little gas-guzzlers. You’ve surpassed the promise of your name, Hanoi Rocks. Our multi-lingual bike-rescuer tells us where to find a nearby parking lot. We drop them at a safe place a few minutes away, thankful our Hondas are not running rampant in the streets of Hanoi.
Strolling back though the junky market, we stop for round two of questionable-meat-filled noodle soup, play pool at the hostel, hit the gym. Our workout is comprised of barefoot deadlifts and pull-ups.

After, we take Flo’s bike and ride out to where the buildings become taller and the lights brighter–the fancy part of town. A massive shopping centre is nestled between two towers. We eat dinner in a window booth on the fifth floor, staring at the ant-people and toy cars zooming around below. On the sixth floor is a massive cinema with movies in 2D and 3D and 4D and mushroom flavoured popcorn. We buy tickets and cozy into the squishy theatre seats with our 3D glasses. Star Wars takes us to space with the addition of Vietnamese subtitles.
The ride home is like a continuation of our latest cinematic experience. We fly through the dark, barren streets like a couple of getaways in the galaxy. The universe is ours! Backstreet Boys songs melt into the night as though a teenage girl from the nineties compiled our soundtrack. We yell hello to pedestrians on the sidewalk. Are we still in Hanoi, even? Where did the seven and a half million people disappear to? Where are the vendors; the garbage? Where did these pristine sidewalks and empty streets come from? The motorbikes that once infiltrated every block are gone, as though the whole lot of them had been wiped out by alien thieves. Or cops.
Just after midnight, we tiptoe past sixteen snoring beds and fall back into dream world.