My alarm rings at 5:50am and I bolt upright, searching for Flo in the blinding fluorescence. I’m groggy and confused. Waking up with my face crushed in the crack of an airport bench is not so disorienting as are the whereabouts of my German companion. Shouldn’t he be asleep on the ground next to me, or waking me for an early round of chocolate crepes? Clarity slaps me across my seat-imprinted cheek. There is no German companion anymore. And I have a flight to catch.
I pull my pack over my raw shoulders and head for Departures.
After stressing and staring at flight deals on my phone screen all night, I decided to risk going through security with a one way ticket into India, despite warnings that they won’t let you on the plane without proof of an onward flight from the country. Planning ahead is not my forte. It makes me feel restricted. I don’t know where I’m going to be tomorrow, let alone ten weeks from now.
My stress is in vain; airport security is a flash, and soon I have a coffee in hand and am nestled in a corner of the food court, entranced in phone land. When I glance up at the board my flight number is flashing red: LAST CALL.
I’ll smack myself later. Scrambling my things together, I sprint through the food court, down an escalator and to my gate number.
A bag check and pat down are ‘mandatory’ to board the flight, but everyone is smiling and the rising Thai sun bounces through the windows of the building, inviting all the possibilities the day has to offer.
IndiaIndiaIndia.
It feels like the corners of my mouth have been duct taped to my ears. I walk onto the plane. The seats are orange and red. The passengers have cinnamon-coloured skin; bright colours decorate their shoulders. My heart cartwheels across my chest.
I always end up in a seat directly over the wing of the plane, but today my view is unobstructed.
I fall into a semi-doze of half-dreams, then attempt to stifle my shuddering weeps watching some sad movie while the cute couple next to me play a Bollywood film. When the plane dips below the clouds, a smokey land of forts and brick buildings sprawl infinitely to the horizon.

Touchdown. It is 12:05 in the afternoon on New Years Eve in New Delhi, India.
It’s a long walk through the airport, which is rather…empty. Isn’t India supposed to be overpopulated? 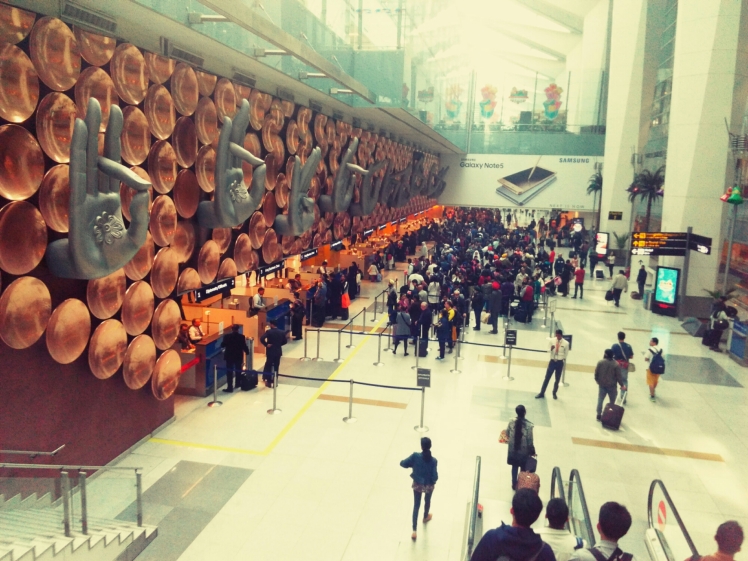 I exchange dong for rupees, find the metro, mind the gap, and sit down. Not a single person passed me in the tunnels to the metro, and only a couple dozen eyes can be counted on this train, all of which are boring holes into head. My brow furrows. I wonder if they notice my mouth twitch as I stifle a giggle; no one exaggerated when they told me how shamelessly Indians stare. I am the only female present, and every man is looking at me. No smiles are offered. I’m not sure how to react.
I eenie-meenie-mynie-moe-d the list of accommodation in my Lonely Planet guide and, so, at the directed station, I depart the metro and climb the stairs to the street. The sun is low and the air is cool (wait, what? Where’s the suffocating heat?). Busses and rickshaws are stacked along the road. Drivers yell at me.
“Where you going ma’am!”

This is the New Delhi railway station. Out front mill hundreds of people and families and vehicles, decrepit old men in vivid turbans with skin sagging from their skeletal structures, wrinkled ladies huffing trunks of luggage on their heads. A man with crippled legs pulls himself across the pavement, his lower body lumped on a wooden platform with wheels. Mounds of luggage are stacked on the front steps, families sitting around them like small villages settled around the base of mountains. People run in and out of the station, up and down stairs; rickshaws honk and ticket-men yell and every colour the earth has ever know is right here. Nothing, however, escapes the ubiquitous dust cloud–multiple layers of it coat the dogs and the cows, the faces and the clothes of the people, it is smudged on every surface still and moving, muting the vibrancy of colours in a hazy way that makes it all feel like a dream. Deafening honks swim through the sunrays, almost an echo by the time they register. Heaps of trash scatter the ground, smattered with cow dung and chunks of human feces. It reeks of urine, and the stains and puddles every few feet give away it’s source. Walking past the perfumed chaos and down a street, not a single female can be seen. I continue for ten minutes until realizing I’m heading the wrong direction. 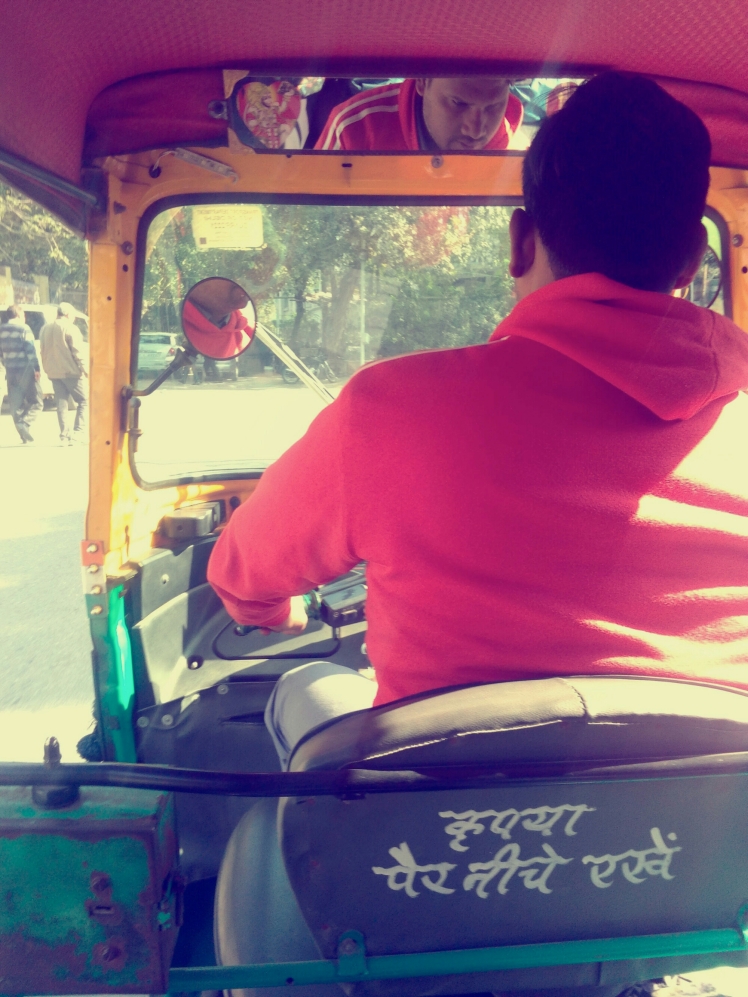 An hour of rest from the incessant touts is barely preparation for another trip to the outside world. I decide I’ll go buy that ten dollar bus ticket to Rishikesh so I can escape this insanity first thing tomorrow. And then I will get some damn food.
After five minutes in the street I’m joined by a tall fellow, swearing that he met me earlier. I don’t so much as give him a side glance. But I can’t find my way back to the travel agency where the guy with the glasses was. I look at the tall dude.
“Why don’t you just take the local bus? It’s much cheaper.”
I hadn’t thought about it. He says he can show me the route. For the next hour, he leads me through four metro stations, past the masses of New Years Eve crowds and finally to the Kashmiri Gate bus station.

Rows of busses are lined up, and he points out the one that will take me to Rishikesh.
“Now you know where to go tomorrow. Okay, we go back.”
The ever-growing jumble of knots in my brain loosens for a moment. There’s no way this little city tour is costing me nothing. We hop in a rickshaw and stop off in Old Delhi because tall man wants to show me the Red Fort. He buys me an Indian cigarette and a guava.
“Okay, I want to go back now,” I say.
Back in a rickshaw. We split the cost and then I’m too spent to shoo him away, (Indians have the persistence of a mosquito with a zippy metabolism) so when he suggests a place to eat, I trudge after him into a club flashing with disco lights. Music blares. It’s 11:30pm on New Years.
We sit, and he thanks me in advance for the beer. Slick move, tall man. I knew the city tour wasn’t free of ulterior motive, but that’s okay. He did take an hour to show me the local transit system.
The curry is phenomenal. He nibbles roti, but mostly talks until he’s talked his way over to the other side of the table and beside me. I study my can of beer. Eight percent? Sheesh. He’s still talking. And then I’m agreeing to let him massage my hand because he’s “really good at it” and then he’s saying things that sober my thoughts if only for a moment, and in that tiny patch I realize I am some random white girl alone in a foreign country sitting in a disco club with a strange man who is massaging my hand, whispering creepy nothings into my ear and I’m not even sure I know how to get home.
I’m angry–with him for noticing my disadvantage and trying to cash in, and with myself for letting it go that far. I share my feelings in a somewhat uncontrolled manner, bolt from the table and give the waiter some cash.
The streets are no less confusing past midnight. The crowds are gone, but the stragglers are last years intoxicated riff-raff. Words are thrown at me as I huff down the road looking for my alleyway. I’m lost. Tears well up in my eyes, but I’m NOT gonna cry, I’m not, and the next guy who says a word to me I swear I’m gonna–
“Hey!”
It’s the guy with the glasses from the travel agency.
“Are you okay?”
I tell him the name of my hotel. He walks me there and tells me to get a good sleep. Up the stairs, in the door, on the mattress. And I stay there for the next eleven hours.