At nine am I sit outside the hotel restaurant and eat parantha, mesmerized by the Himalayan foothills.
“Do you mind if I sit at your table? It’s chilly in the shade.” A lady sits across from me, Amber from Toronto. Another Canadian! I haven’t met many other Canadians on my travels thus far. We compare notes on traveling solo as a woman in Asia. They don’t differ much (lots of awkward staring, men sneaking photos when they think you’re not looking, the “are you married?” question from everyone). Today she goes to the biggest ashram in Rishikesh, Parmarth Niketan, to begin a two week yoga retreat which involves an intense schedule of early mornings, yoga and meditation, clean diet and no-nonsense spiritual delving.
Wishing her luck, I pack a bag and cross Laxman Jhula to the east side of the river. 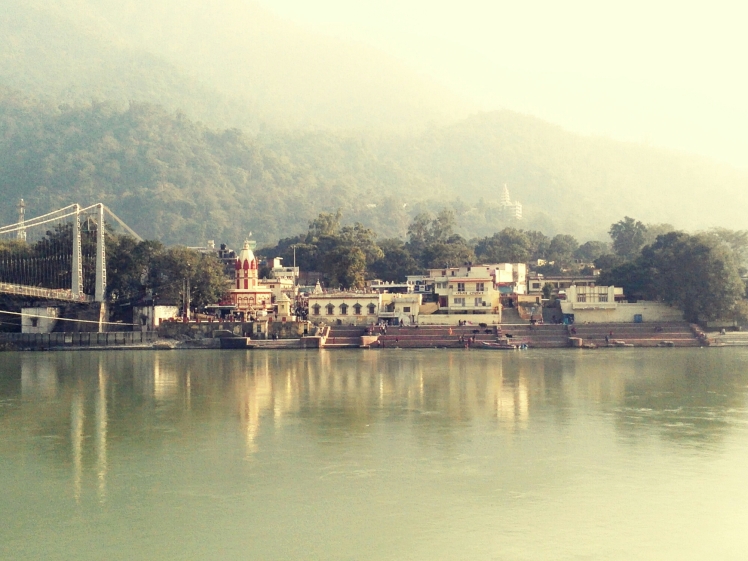 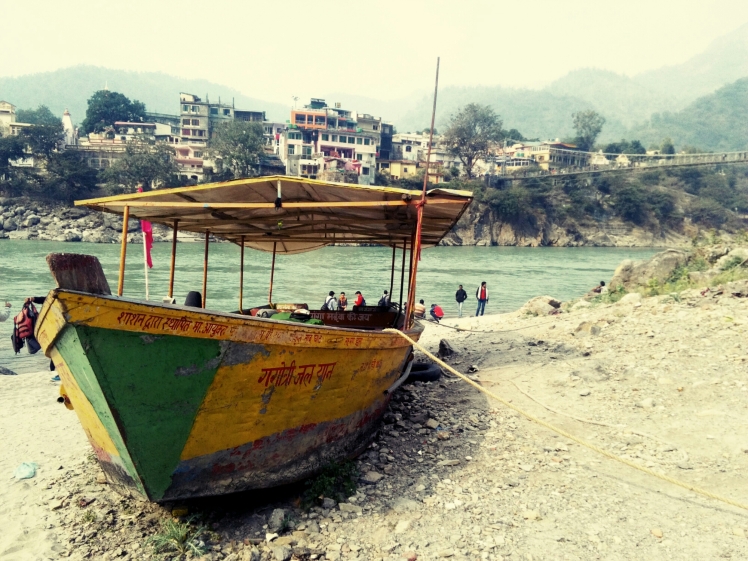 Today I want to check out the Beatles Ashram and visit the baba cave (baba is a respectful term used to describe someone, often of a high spiritual order or knowledge; a holy man; father). I walk slowly, past stalls of jewelry and clothing, stopping to check out a temple and buy fresh fruit from a man with no teeth.

Along a footpath lined by a chin-high brick wall, a tall metal gate breaks the solidity

Through it is visible a small, decrepit ashram on the riverbank. It’s characterized by big, open balconies and outhouse-sized living quarters. Walking through the gate and past one of these shacks, a door bursts open and a man appears, shaking his finger at me. His brows are furrowed. He points at my shoes. No shoes. And no speaking for him, it seems. Dodging cowpies in my barefeet, I suddenly have to pee very badly. There must be a washroom around here. h

Through the maze of outdoor hallways, past a couple young guys sweeping and skirting around a man herding cows from their stalls to the rocky riverside, I run up a staircase and find a dirty bathroom with no toilet paper. It’s a drip-dry situation. After, I head to the Ganges to sit amongst the rocks, watching as three men stand knee deep in the water, tiny white skirts tied up around their waists, voices monotonously chanting while holding their prayer beads, splashing holy river water onto their faces. t

I wander to Parmarth Niketan, the ashram that Canadian Amber told me about. The street food vendors distract me, and I gobble some chana chaat–an ingenious mix of hot chickpeas covered in spices and sauce. Ignoring common health guidelines for foreigners, I nod when asked if I want fresh tomatoes with it. It can’t be much different from eating fresh fruit and brushing my teeth with tap water. The spices burn my mouth, so I pant my way over to the icecream vendor after for a pistachio pop to relieve my stinging lips.


Further on, the brick-lain path disappears through a dilapidated area of half-destroyed buildings and slum-hood, then, on the other side, an ashram, or the beginnings of one, emerges. On the sandy shore to the right are the living quarters of squatters, distinguished by shabby beach shacks and haphazardly covered holes in the rocky cliff face; Privacy brought to you by Corrugated Metal Sheets.

On the upper grassy area, cows lope and monkeys as tall as my shoulder gallop around. I walk up a small road to the entrance of the Beatles Ashram.
In 1968, amongst widespread media attention and accompanied by their wives and girlfriends, The Beatles arrived in India to study Transcendental Meditation. This is the ashram that they wrote most of the songs for The White Album, plus multiple others.
But the entrance fee will put me over budget. Is it worth it? It’s impossible to see anything from the entrance gate, as the path heads directly up and into a forested area.
Saving my rupees, I turn around and head up a dirt path where I spot an overgrown trail leading across a dry riverbed and through the jungle. I crouch through the foliage, thinking that I must not be the first budget backpacker to search for a hidden back way in. Thorns rip at my bare arms and tangle my hair. Trees rustle. What kind of animals are in the jungle out here, anyways? I have the navigational skills of a drunken Alzheimer’s patient, so I look to the sun for answers. It just says, ‘It’s gettin’ late, girl.’
Then, car noises? The brush clears to a paved road. A lone, robe-swathed pilgrim passes by, skinnier than an empty sack, arms loaded with overstuffed bags, ankles weighted with metal jewelry. Is this the ashram!?
A little down the road to the left, a large sign stands erected. “Rajaji Tiger Reserve”. 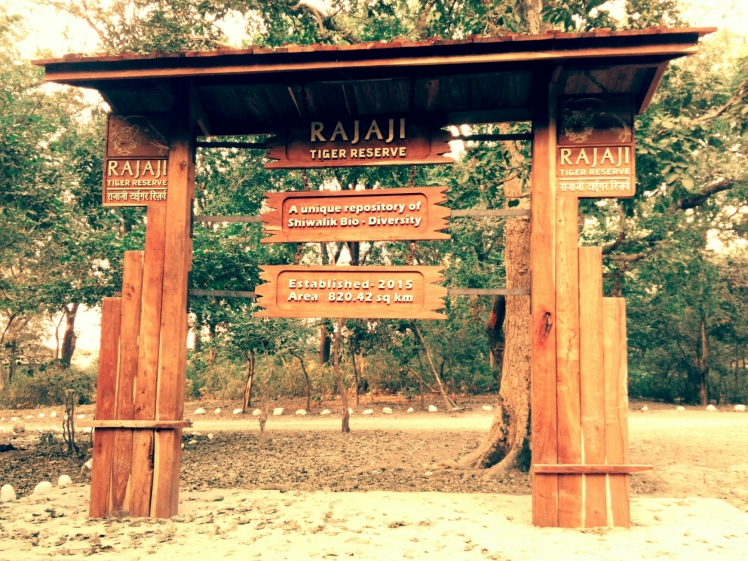 Oh. Tiger country. So that’s one kind of animal in this jungle. I turn uphill to see a couple tourists heading my direction. They say the baba cave is up that way. I won’t make it before sunset. So I turn around, pass the Beatles Ashram gate and back to Parmarth Niketan. 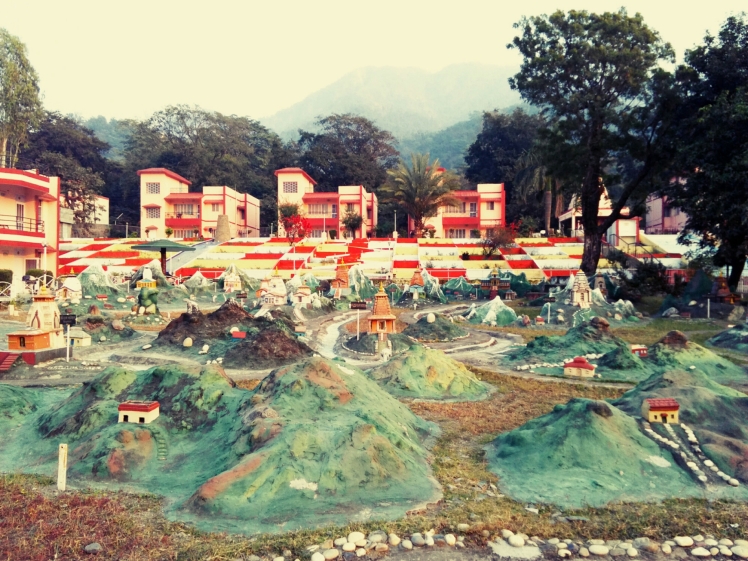 Ganga Aarti is just beginning on the ghat below at the shore of the Ganges.
Ganga Aarti is a devotional ritual using fire as an offering, practiced every evening on these steps. I join the crowd of people gathered and seat myself on a lower stair. At the base sit Hindu priests in orange robes, a larger group of children in matching dress with serious faces, and several students of Parmarth Ashram. In the middle is a fire, and around it they sing and chant while the people nearest the flames perform a prayer, tossing small white objects (what are those?) into the fire with their fingers held in a particular way. 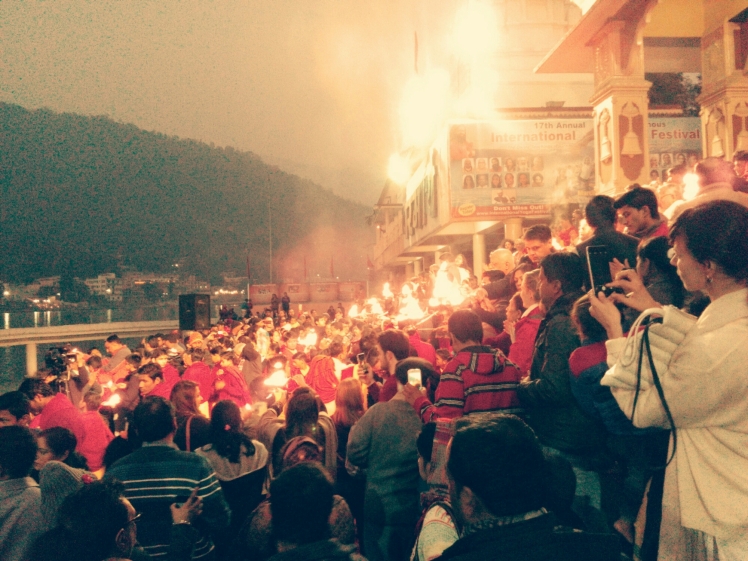 It continues for twenty minutes, and boredom flits around my brain a few times before morphing, as a caterpillar morphs into a butterfly, into relaxation; peace even; settling softly as a feather at the base of my cortex. More people flood the ghat, joining in the singing. Clapping along, I can’t help but crack up as the cute kids in front of me dance like someone spilled chana chaat spice in their underpants. Their mom snaps a photo of me laughing at her children.
Golden tiered lanterns, alight with the fire of dozens of candles, are passed around the crowd. Each one is grasped by many hands simultaneously, and they move it in circular motions. One at a time, every person cups their hands over the smoke and turn thier palms to their faces, then pass it to the next group of appendages eager to purify their spirits with the vapour of the fire god. The top candle is the last to burn on every lantern, and this final fire is brought to the monks at the shore, who put it in a floating dish with flowers and release it to Mother Ganga. 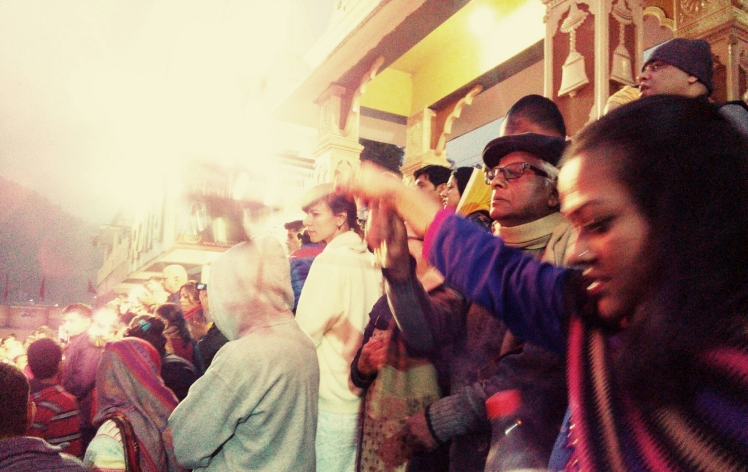 I walk back to Ram Jhula (the footbridge south of Laxman Jhula) and climb a steep set of stairs to the main road. At the top, a young American tourist is dismounting the back of a scooter, thanking the young Indian driver. As I walk away, the driver calls to me.
“How far are you going? I’m heading that way.”
“How much?” I ask. I did a lot of walking today.
“No money,” he says. “I’m not a taxi.”
Good idea or not, my tired legs climb on the back seat, and we drive through a slanted neighbourhood and down a dark road by the river. A good spot to meditate, he says. We sit on a concrete block and he burrows into an intricate speech about meditation and yoga and spirituality. His accent is so thick that only half of it translates sensically. I tell him I want to go home, and have him drop me near my hotel rather than directly at it. Beelining to the fire, the godly flames hypnotize me for a long time. I stuff myself with vegetable biryani and chai, head to my room and stack up on ZZZ’s for a real Indian yoga experience in the morning.

2 thoughts on “Praising the Fire God in Tiger Country”