My alarm goes off at 830. It’s too warm and cozy in bed to get up, but I have an appointment with my spiritual side today–yoga class starts at 9am sharp.
I meet at reception along with a gaggle of highschool Kiwis, and we’re lead through the garden and into the second floor yoga space. Kneeling on a mat at the front, the instructor, a small Indian man dressed all in white, leads us in a chant before the practice. The poses begin and I look upside down through my legs, counting and recounting the teacher’s toes…eight, nine, ten, eleven, twelve. Yup, there’s twelve there. Maybe here, in the yoga capital of the world, the locals have evolved to acquire a center of balance the rest of us mortals can only dream of.
I curl into cat pose with the rest of the class. Legs tucked under my body, forehead on the ground and arms stretched out in front, I feel one, then two deific feet step onto the small of my back, sinking my hips lower to the ground.
“Okay?” he asks.
“Okay,” I reply. Oh, did I have a choice?
Then he places both hands on my upper back and shoves my chest into the floor.
“Okay?”
Bright spots distort my vision and pain shoots throughout my shoulders as I struggle to inhale air. It’s impossible to get a word out and he takes my silence as an “okay,” keeping all four limbs on my back and pressing my resisting body further into the mat as I focus on willing my shoulders not to dislocate.
My body is momentarily broken after he dismounts my back and, paralyzed, I stay one with the floor. The Kiwi kids giggle incessantly throughout the lesson, but by the time I’m floating out the door my body feels two years younger.
I glide back to my room to dress myself, then head down to The Beatles Cafe and mow an Isreali breakfast of humous and eggs and salad; Mother Ganga flowing infinitely below. 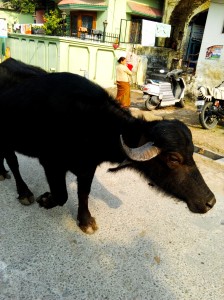 When in Rishikesh, one shall attempt to get in tune with the mindful spirit that pervades the town. Before dropping me home on his scooter last night after Ganga Aarti, Himansou had shown me a nice spot to meditate by the river. I walk down the hill and sit on the steps of the rather unpopulated ghat, close my eyes and sit cross legged. River rafters bounce by, screaming and laughing. I focus on the dark space between my eyes. Doing nothing is hard.

Fifteen minutes later I cross Laxman Jhula and start my second attempt of the four kilometre trek to the waterfall. Last time my attempt was duped by a rather, uh, creepy prospect. The mission had to be aborted.
About two kilometres in, on this rather deserted road, a scooter passes. I notice the driver staring at me in his rear view as he disappears from sight. A minute later, he reappears, driving towards me. Again he passes, readjusting his rear view mirror until I can no longer see him. This happens again. And again. By the fifth time, I’ve got my eye on a brick-sized rock that could come in handy, situation depending. This time, the guy parks at a bend in the road fifty feet away.
As though I’d just blown the rape whistle, a second scooter swoops in and stops. The driver turns around and calls to me. It’s Himansou, the guy who drove me home last night. He offers to take me for a tour around the mountains. Ah, Mission: Waterfall–duped again! At least I’m safe from Creepy Scooter Guy.
Following the road and taking a left over a big bridge, we ascend the base of the Himalayas. Himansou points to a large peak.
“That’s where we’re going,” he says.
It seems worlds away.
We zig-zag through switchbacks, as little kids materialize from the leaves every so often. “Hello!” they scream.
What in the world are they doing out here? A woman and her goat sit alone on the side of the road. Holy men continue their pilgrimage to who-knows-where. We stop in the bend of a switchback and rest on a huge concrete barrier, looking to the river far below that cuts through the valley like a wet knife.

Tiered rice fields rise up the mountain like the moss-covered, honest-to-goodness Stairway to Heaven, and Himansou uncloaks a fresh bottle of rum. We sip it while I strain to make sense of his insane babbling, its cuckoo content garbled by thick, rolling R’s and minimal English vocabulary.
Again, the subject matter is deep and spiritual, and as I watch this scrawny guy chug half a small bottle of rum, I wonder if what he has to say has any significance or if it is solely the verbal diarrhea of a confused man.
We hop back on the scooter. I’ve come to trust Eastern drivers wholeheartedly, even after more than a few good swigs o’ rum, because it’s likely they’ve been driving in the insanity of Asian traffic since they were twelve, ie. experts (shh, let me have this one. It helps me sleep at night). My other choice is to just kick it in the mountains in the company of the Magical Materializing Children and, probably, Creepy Scooter Guy.
We roll down the switchbacks and through the peaks, entering the Rajiji National Park Tiger Reserve. We pass a village: population fifteen, and gigantic piles of elephant pooh.

I start to shiver on the back of the scooter. Himansou drives to the main town of Rishikesh, where not a single tourist is seen. The maze of streets bustle with markets and motorcycle shops and animals and people. We stop at a vegetable stand and stock up on stuff for dinner. For some reason I have agreed to eat dinner at his home, although I’m not sure how much more of his ranting I can justify as thoughtful and interesting anymore.
Then, we loop back across the river, crossing a huge dam. The Ganga has been moved! It’s incredible that humans have taken over the hand of Mother Nature and veered the course of this beastly waterway at a ninety degree angle, as though it were some malleable hunk of piping. It’s not its preferred path, and I imagine the holy soil churning away below, scheming it’s revenge, biding it’s time.
We head back into Rajiji Park, up and up and then pull over, plopping down on a rock perched on the edge of the world. A couple of disturbed peacocks shoot from the foliage below us, flapping wildly away. From this spot I can see my cottage emerging from the trees directly over the river. Buildings fan across the Himalayas to the right, orchestrated into perfect harmony with the mountain majesty they’re nestle into.
Awe rises in my soul. Incredible India–nailed it.
We have another glass of rum, chatting until the velvet cloak of night hides the hills from our eyes.
My layers are not enough for the ride back, and I’m frozen by the time we reach Himansou’s apartment through the web of his neighbourhood. It’s a humble little bachelor pad, and we sit on blankets, chopping vegetables on the floor. He lights up a small propane tank and cooks eggs on his mini frying pan.

We sit on the floor eating our breakfast-for-dinner until it’s clear he’s either cracking up or speaking cryptic messages beyond my comprehension. I excuse myself.
I run back through the alleyway maze, trying to stay warm, and into my cottage to curl up under the blankets. I’m relieved to be here. Sometimes I give people more benefit when I should be giving a little more doubt. In certain situations, this openness can lead to wild, wonderful things. In others, it can lead to more wild and less wonderful things. And this, I realize, is how you fine-tune your intuition skills on the road.
I fall asleep without brushing my teeth, only to wake hours later, hungover and restless. I draw pictures of demented creatures and then lay in bed fitfully until, somehow, sleep comes.