Marnie and I are up earlier than is morally respectable, so I conk out until my jet-lagged kin shakes me awake again at 9 a.m. It’s time to hit Delhi in the daylight. The bustling streets have been alive since long before that morally respectable hour. Wrinkled women beg for money; street vendors stir pots of chai; groups of men sit chatting, their teeth stained red with paan.

“Hello! Hello!”
It’s the tall dude from last week who followed me in the street, then spent an hour showing me how to decode the local transit system. I had to ditch him in a restaurant later on when he started massaging my hand and sneaking inappropriate comments into the conversation, and now here he is again, tailing my sister and I through the city. He says it must be fate that we’re meeting again. He seems to have forgotten that I angrily left him sitting alone at a restaurant table a week ago.
“What’s wrong with you?” he asks. “Why are you not excited to see me?”
He hounds us all the way through the market, grilling us with questions about what we are doing and where we are going until somehow we manage to shake him, and he is left standing in the street with pouty eyes while Delhi whirls around him like a dusty, chromatic tornado. 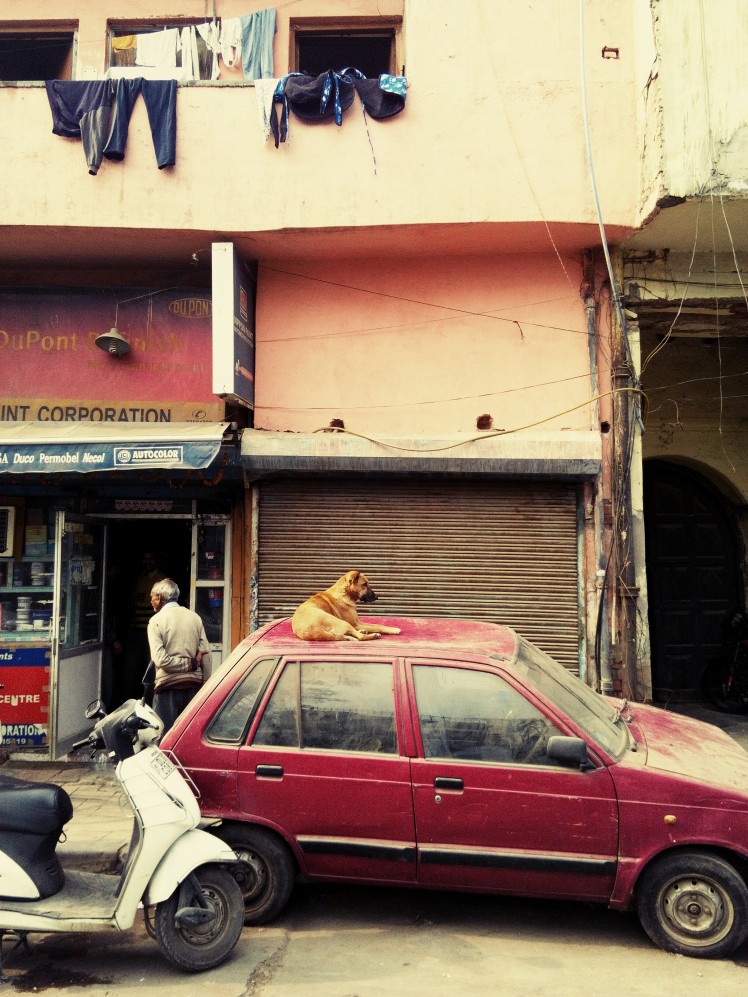 We spot a funky green top hanging at a street stall and take it off the hanger. Marnie begins to try it on over her shirt, garnering an eight-men audience within seconds who line up to observe the top get stuck around her elbows as we become incapacitated by laughter.

We continue towards Connaught Place, a ‘ritzy’ tourist area built up of a massive roundabout style of buildings, two circles deep, separated by roads and organized in blocks of ABCDE. Here, it’s impossible to walk a few feet without a third party clinging next to us; another curious male asking where we’re from? what do we think of India? where are we going now? and what hotel are we staying at? A man in a green vest and sunglasses stalks us for fifteen minutes, laughing innocently when we confront him about his distant observation tactics. This only encourages him to stalk us from a further pace; his bejewelled shades impossible to miss even from across the street. We duck into a dingy restaurant for hunger reasons (and safety measures). Palak paneer, paneer masala and raita. We feast like queens at this scuzzy hole in the wall, then stop for a couple bottles of cola at a shop down the street. The vendor cracks the lid and we turn to walk away.
“Bottle, bottle!” he yells after us.
Confused, we continue on as passers-by watch and laugh.
Around the bend we’re stopped by a man who says we can’t walk down this street.
“The tourism office is over there.”
This seems to be a popular spot to send lost looking foreigners. Lonely Planet warns that this is a popular place for scams to take place because most tourism offices in Delhi are not legitimate (in fact, there is only one real tourism office in the city). A kid in a striped sweater from the cola shop shows up. He talks to the man, who translates that we only paid for the contents of the bottle, and must return the bottle to him. We chug our sodas and cross the street to return the stolen glassware.

This Connaught Place deal is a hoax; saturated with fast-food places, American chain stores, “blocked” streets and too many Indian men in fancy suits and sunglasses on their phones, following us around every corner.
We head back to our neighbourhood and are harassed incessantly on the way to the hotel by touts. Agitated and exhausted, we take a breather in our hotel room before going out to look for jewelery and hippy pants. We take a grace period in a restaurant with wi-fi which is an opportunity to register on the rail website so we can book trains online, which is cheaper than through a travel agent. I try to find a bus to Agra (one day in Delhi is plenty), but my phone is dying in correlation with my sanity. I’m wound up and now every tiny thing is getting to my spoiled first-world self; my virgin mojito (never order a mojito, virgin or otherwise, in Delhi. It’s not their specialty) takes fifteen minutes to arrive; my phone dies.
We head to a bar for a couple of hefty, non-virgin drinks. Even a beer-long moment in a dark watering hole away from the overstimulating streets of Delhi leave us exponentially more relaxed, and our attitude towards the beggars and the boys adopts a grain of salt.
Wandering the streets again, humour is restored and we have a funny conversation with a man at a dosa house while we eat dinner. Our server refills our plate until our tummies are pregnant with lentil and chickpea babies.

Shopping along the street on the way back, we try clothes on in staircases and joke with the vendors until exhaustion hits again and the grain of salt is dissolving in the bottom of our chai cups and we trudge back to our room, brains dwindled to caveman caliber.
We sleep; commence humour restoration project.