We awake in our peach-coloured room, take hot showers and brush our hair. Up on the rooftop patio–for the sake of the inner wiggle of our tummies–we order plain toast, plain cornflakes, plain eggs. After a landslide of questions about our travel plans, our server spends twenty minutes writing a month’s itinerary for us, then asks for our credit cards to book the flights. We take a pass.
But even a vanilla breakfast cannot subside the abdominal wiggles, and we rush to the room to rest our heads. At 1 p.m. we extract ourselves from the peach pit and head downstairs. Reception manages to intercept us before we can slip out and they pass off a ‘guide’ to show us the way to the river, and so we begrudgingly follow our bug-eyed, frowny leader through a web of confusing, trash-lined alleyways which finally open to reveal a wide ghat–a set of stairs leading down to the ever holy, ever polluted, ever famous Ganges River. I look upstream and it’s like a cork has lodged itself in my throat and–is there something in my eye? A river of emotions wash over me as I overlook the hazy shores of Mother Ganga. This exact scene, captured in a photo fished from the depths of the internet, has entranced me from the background of my laptop for so long I can’t recall when exactly I put it there. It was to serve as a reminder of what I was saving my money for, during a wave of “positive thinking”. In the flesh–in the smelly, filthy, poop-smeared, leprosy-infested flesh–it holds all the magnificence that photo promised, and all the unpolished, intricate, complicated beauty that hid tucked behind it’s edges. 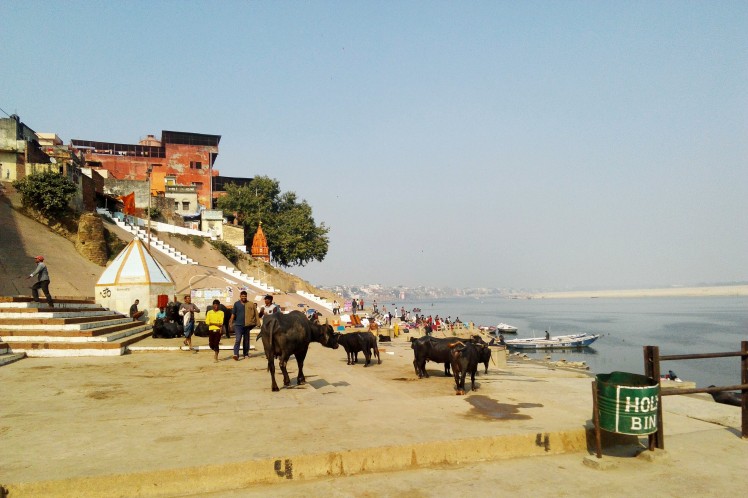 The city is built up along the curve of the west riverbank while it’s opposite bank is flat sand, save for some row boats dotted along its shore. On this side, the eighty-seven ghats of Varanasi line the river as though a pre-tesselation-obsessed M. C. Escher–when he believed in the infinite but not yet the impossible–had painted something straightforward. On this concrete ghat, several funeral pyres burn the deceased bodies of souls in flux, this ritual releasing them from the cycle of rebirth and ascending them to some blessed aftermath. A body awaiting its fiery departure lays wrapped in orange decorated silk as men carry firewood to the water’s edge. A bald man turns the remainders of a carcass in a pit of smoke, stoking the embers. Several “Untouchables” sift through the muddy shore to recover gold jewellery left behind.
A man stricken with leprosy climbs the ghat, a scrotum-shaped growth hanging from his cheek. A dog hobbles by. Whatever it is, he’s got it too.

Our pop-eyed guide explains that it takes a long time to prepare the fire and the wood is expensive. If the person being cremated is male, all of his hairs–head and facial–must be shaved off beforehand. The men of his family perform the ritual; women are not permitted to attend the ceremony or even observe as it is believed that their emotional cries will disrupt the soul in its journey to moksha. Cremations are not sad ceremonies. They are rituals intended to release the soul to a place better than earth, and for loved ones to set free their attachment to the person’s body. Then, he who shares the closest relationship to the deceased is to light the first fire, but first, he must also shave all his hairs, take a dunk in the holy Mother Ganga and swath himself in a white robe, wrapped Ghandi-style. The torch is lit from the eternal Holy Fire, which has burned continuously in a nearby temple, twenty-four hours a day for thousands of years. The body is placed in a carefully constructed bed of firewood, blessed with holy water, anointed with ghee and lit with the sacred eternal fire. It takes three hours for the body to cremate, at which time its ashes are spread into the Ganges. In men, the only part to remain whole is the chest bone, as it represents their strength. In women, the hip bone–representing her life-bearing body–is saved. These parts are tossed into the river, and now the person is considered blessed and free to travel to the afterlife. The only bodies exempt from this burning ritual are holy men, called a sadhu (they are already holy and therefore, blessed), a baby or child under ten years (they have no karma, and are still pure), a pregnant woman (she bears a baby), a victim of a cobra bite (the god Shiva wore a cobra around his neck, and therefore, the cobra is a sacred animal, causing a holy death), and a leper (the diseased carcass may spread bacteria through ash). And so, these bodies are sunk whole in the middle of the Ganges.
We continue north along the ghats. Everywhere, kids fly small, square-shaped paper kites. In two days the kite festival takes place here, but the intention is not to show off big, impressive sky ornaments. The goal is to cut down the other kites with their fiberglass-coated strings (hey, Kite Runner!).
To our right, a dead animal floats in the polluted waters. Curious, we walk down to it. The rotting flesh is nearly gone, leaving the organs and insides exposed. Its decomposed lips leave the teeth of what was once, perhaps, a dog, set in a permanent grimace. Not fifty metres downstream, a man scoops water into his mouth, and beyond that, a group of men in their underwear bathe in the holy river after a burning ceremony. Water buffalo nap on the steps above; some amble by, aloof.

Hindi graffiti and pictures of Shiva splatter the concrete walls and we climb up the ghat, the stairs so steep I hang on to the handrail out of necessity rather than comfort. Through a temple at the top, we are faced with another wall painted with Shiva, Brahma, and a line up of countless other deities. Our guide leads us through the high-walled maze of alleys to show us the hand-woven silk saris being made, then to a factory where the finished saris are ready to sell. This is where they attempt to make a few cheeky rupees by selling low-quality silk at exorbitant prices (by Indian standards) to naive tourists. Silk touts. We sit at a row of chairs in front of two men on a low tableau and they flutter sheath after sheath of beautiful silk scarf in front of us, a perfected, prismatic performance, until we excuse ourselves, thanking our guide (he was an informative little guy!)

It’s lunchtime. Varanasi is filthy and confusing to navigate and touts are as rampant as the stray dogs. Finally, we see a sign–“rooftop patio restaurant”–and approach the men at the downstairs section.
Two questions: Is the patio open? Do you serve beer? We are awarded with a scramble of head nods and head wiggles. They wave to the staircase and tell us to continue to the roof. After seven flights of stairs, we turn a corner to the dank “patio”. The floor is littered with dirty toilet paper and garbage. Two plastic tables sit askew, one covered in a bunched-up plastic tablecloth and an ashtray brimming with old butts. Lawn chairs are thrown in every direction, some with stained covers and others with holes in their browned fabric. The electrical outlet on the far wall is caked with dead flies caught in a spider’s web. A brown sink juts out into the room. The entire patio is caged in with bamboo blinds that hang haphazardly from wire netting on every side. A collection of dirt and dust coat the whole ramshackle charade in a layer thick enough to suggest nothing here has been disturbed since the city’s birth.

Marnie and I hit the ground simultaneously, the possibility of breathing now undermined by feral laughter.
This IS India.

Twenty minutes later our beer order arrives (it is doubtless he ran to the beer store specifically for us)–two tall cans and two big glasses. Our laughter has subsided enough for us to wear a straight face when we ask for the bathroom.
“On the second floor.”
Just down six flights of stairs. We cross our legs and crack our beers and cheers to India: The Unexpected. Our server returns with a plate of sliced raw onions and tomatoes sprinkled with salt.
“You drink beer, you finish, and you come down and pay now.”
So many mixed messages. After our brews, we descend the stairs to pay, then go to our hotel for dinner. The curry churns in our stomachs with the bubbly beer.
Back in our room and ready for bed, we think of the man on the steps with his droopy cheek growth. How, exactly, is leprosy spread? Our curiosity leads to a Google search and the discovery of some horrifying images just before we fall asleep at 6:30 p.m.