Marnie and I praise sweet Lord Shiva that we didn’t book a 6 a.m. safari today. Our early-riser efforts would be in cruel vain, thwarted by the thick mist that engulfs every tree and building and warthog this morning. We go to the rooftop restaurant and Marnie watches me eat; her tummy is treating most food as an illegal immigrant. Over breakfast I get some writing done, then scribble a scene for Marnie to workout her acting skills. It’s about a guy and a girl on a safari in–wild card!–India, and before I can read it out with her she has fled to the comforts of our hotel room toilet.

We have a 10 a.m. date with the biker boys to pick up a couple safari tickets for this afternoon. Apparently Nikki, who is one of the motorcycle dudes we met on our ventures yesterday, has a friend who works at the ticket office and can get them for us at half the cost (scams always sound glaringly obvious in retrospect).

The plan is to meet him and the rest of his shop-owner friends at the odd little mall they work at. A little ways down the street I flag down a big jeep-like vehicle, canvas covering the top and sides, packed with people in the back. It’s a taxi, of all things (we can’t even hitchhike properly). It drops us at the oddmall and we’re ushered to a couple seats in one of the shops. A man brings us chai while we wait for Nikki. When he shows up, he says we have to drive to the ticket office in order to get the “discount”. The three of us jump on his motorbike and pull up in front of a snack shack where we sit in lawn chairs with other morning loafers and down more chai. We chat with the leisurely tea gulpers while Nikki makes calls on his mobile. Some ladies come by, half singing and half begging us for money. Bantering back to them in Hindi, the guys wave them off.

I look down at the blanket folded over my torso and slowly lift it off my belly to reveal the fannypack beneath my crossed arms. I hope, at least, that is what she was referring to, and not hinting that I have cankles and a swollen jawline. I rock the fannypack in my arms like a newborn. The women cackle at me. Funny gal.


After over an hour of conversations dispersed with mysterious phone calls, Nikki pulls me away from the group and covers the phone with his hand. He gives me the final offer. The last price for these “highly discounted” safari tickets, which now include foreigner charges and a ‘same day’ fee, is more than double what he originally quoted and is the same price every hotel in the ‘hood offers for an identical safari experience. It’s the white price, not the right price.

The chai-shop owner’s dog, a big, honey-coloured guy, trots around and nuzzles his face into my hand. I pet him and tell Marnie it’s time to go. I see the owner grab a long, thin stick and break it over the dogs back. The pup bows his head, quivering.

“Why did you hit him?” I ask, sheepishly. My hackles are up, but I feel outnumbered.

A couple guys to my left giggle and mock my question in discreet tones. The owner smacks the dog on his head and with the rest of the thin branch, whips him across his back.

It’s definitely time to go. Another situation has risen here, one that is impossible to watch but impossible to ignore. Again, I feel helpless. And cowardly, for the way I shut down after two dudes mocked my pathetic protest. I’m not sure what to say now, if anything. I always imagined that if I was faced with a situation as such, my will and confidence to do something brave would overpower any other negative emotion. Logistics–the men to women ratio, the alien setting, the cultural differences, their understanding of animal abuse in comparison to our own–overwhelm me in capacity and complexity and ask whether the effort to dispute the situation is worth it. That old, bubbling rage stews in my gut. Actions borne of anger do not necessarily equal bravado. Paralysis borne of fear is not necessarily an excuse from action.

Nikki and Hammond drop us off up the street from our hotel. When we reach reception, we book a safari for 2:30 p.m. that will pick us up out front. It costs the same as Nikki’s safari, hold the hassle.

Marnie and I hang in our room until then, eating some cryptic curry and writing until a knock on our door brings us to our feet and we run outside with our pashmina blankets flowing behind us like the capes of some sleepy superheroes. We’ve booked a canter, which is a massive, military-style vehicle with an open top. It has gratuitous ground clearance and seats twenty people. We’re the last people to load in. Marnie sits on a little platform between the driver and passenger seat, with me directly behind her by the stickshift.

The canter careens toward Ranthambhore National Park, stopping just shy of the entrance gate. Langurs hang from every branch above us and stand along the top of the stone wall to the right like a fuzzy army. Their little black faces are framed with a shock of white hair, accentuating the intensity of their gaze. A convoy of Gypsy’s and canters wait at the gate. We pass them and move forward through the desert scrub, turning onto a dirt road that snakes over the low mountains, through palms and low, leafless trees. The landscape is a sunburnt rainbow of yellows and browns and oranges. 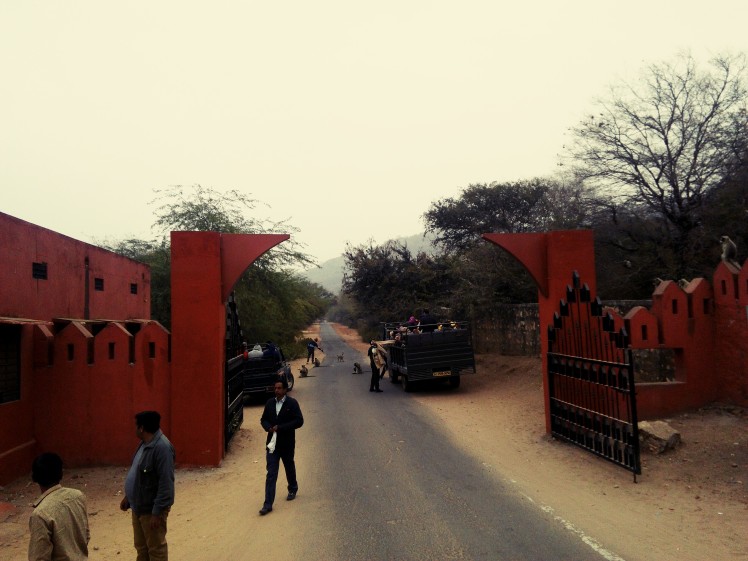 We stop to ogle groups of spotted deer, the little ones reminiscent of Bambi in less than greener pastures. Herds of nilgai leap to snatch low hanging foliage and scrape their imperial antlers against tree bark. 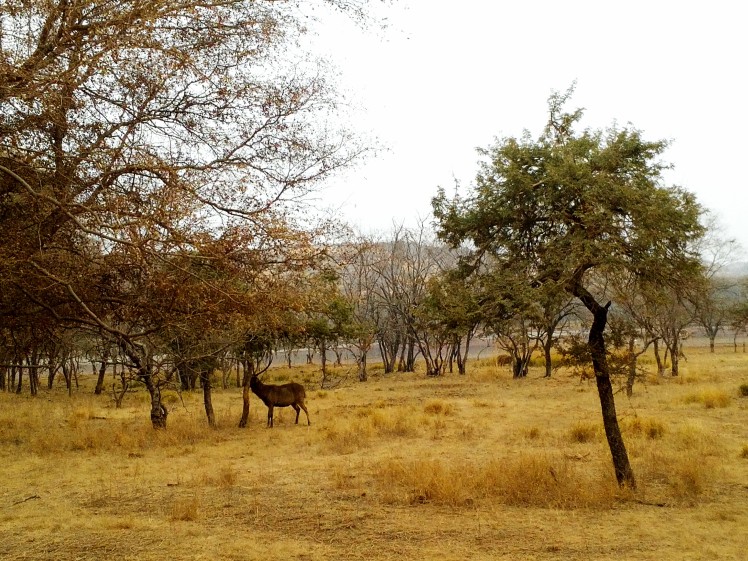 The driver kills the engine alongside a lake with a surface so laden in rose-coloured algae it appears it would be possible to play Jesus and walk to the other side with barely a damp foot. Huge antelope wade through it hip-deep, dunking their faces and pulling up long strands of seaweed as though feasting on a shared plate of subaqueous pasta, Lady and the Tramp style. On the opposite shore, crocodiles lay in wiggly lines, digesting the cloudy rays of winter sunshine. Birds of every feather flock together, creating a sky reminiscent of the kite festival. If-you-can-call-them-trees guard the waters edge. Quiet desert beauty.

Ranthambhore is home to over fifty tigers and ninety leopards, and a multitude of other fantastically wild creatures such as wild boar, simbhal and sloth bears.

As our canter teeters through the bumpy terrain, all of these species evade our sight like trained ninjas. A tigerless tiger safari. In fact, the tigers are likely on a human safari, hoping that today they will be fortunate enough to see some adorable offspring, or observe something really cool, like a couple humans fighting, or fornicating, or feeding. A glimpse into the fascinating functions of the human species.

It’s like a drive through a drought-damaged, posthistoric Jurassic Park. Wild peacocks streak from our path as we ramble back to town, dusk dropping around us like a widows veil.

Back at the hotel, the owner, a sweet, twenty-two year old guy named Bunghee with terrible English (which unfortunately doesn’t reflect his efforts) has a friend visiting later tonight from Udaipur, and he invites us to drink whiskey with them and have dinner, on the house. We agree to join.

In the meantime, we borrow a pair of scissors from the front desk and Marnie goes to work on my split-end mecca of a mane, chopping the saga of bad hair days into “shaggy layers” which will either conclude The Legend of Terrible Tresses or write its epilogue. We’ll see. Both of us are too exhausted to tell anymore. And we’re too tired for dinner, on the house or off, which goes against the general rules of travel life (who are we to pass up a free meal? Free anything?).

Exercising a cordial muscle or two, we leave our hotel room to see Bunghee and meet his friend. Said friend is running late, he says, but we should relax in our room until he arrives and oh, here! Take this box of whiskey and bottle of soda with you and just…enjoy.

So with complimentary liquor in hand we go back to our room, close the door and collapse on the bed. Booze…free booze…we’re even too sleepy for free booze–breaching the laws of life like regular rebels. We are also not in the mood to decode cryptic Hinglish that would probably require the entirety of the small energy reserve we have left from today. Mustering the last of my strength, I drag myself from the springless mattress and to the lobby, hand the unopened whiskey box to Bunghee and excuse our presence from the evenings activities (draining the bottle and passing out in a bowl of freebie curry–priceless).

No problem, he says.

Instead, Marnie and I flick through the days photos, finding the most unflattering ones of each other and giggling ourselves into a coma.