Day 84: Bikaner to Mumbai (Bombay)
With packed bags and the first chai of the day swishing in our tummies and rocketing our blood sugar levels, we check out of Vino Paying Guesthouse, thanking the lovely Vino and his chai-sweet wife for their superfluous hospitality. Clutching pashminas around our bodies and baring our teeth to the algid air, we sprint to a rickshaw–our humble chariot, our pretentious jalopy–that awaits outside the front door.

The Bombay-bound train is already rumbling on the platform when we arrive at the railway station. Our names are on the wait list for this charter–the twenty-four hour journey was booked up when I tried to snag spots online. With no seat assignment, we board coach S12 and plop down in a couple empty seats. 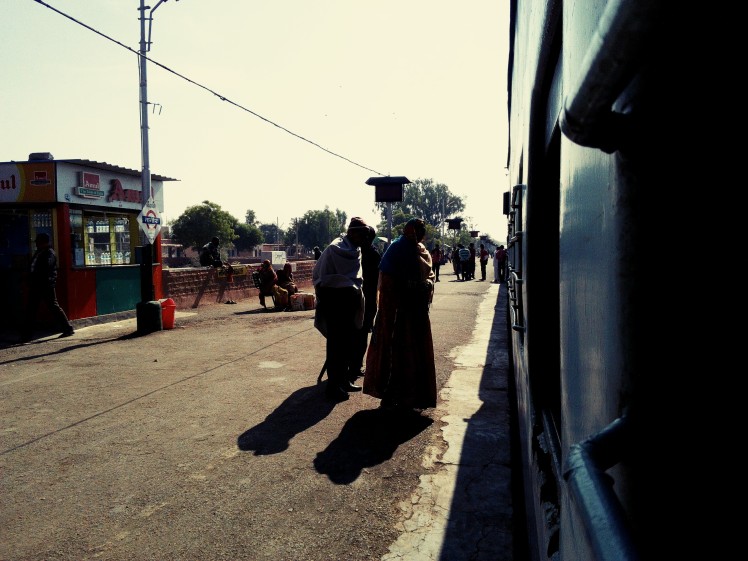 An hour later we are slumped in our third pair of unassigned seats; the ticket checker moves us like chess pieces as the train fills up and our ‘waitlist’ status threatens a checkmate. Lone vendors stomp up and down the aisles, advertising their goods for sale in repetitive calls like Hindi auctioneers or vegetarian, ‘R’ rrrrrolling fishmongers. A young chain peddler (you never know when you might need to spruce up your winter tires) points to the gaping holes in Marnie’s shoes. He pulls a sewing kit from his pocket and stitches the offending site shut. Mid-stitch, his friend sidles into the seat next to Marnie, chugging mystery liquid from a big water bottle. His eyes lag as they follow the goings-on around him, as though his brain is processing things slower than a sloth on Hangover Sunday.

“Drink?” he offers, rattling the sketchy bottle with an outstretched arm.

“What is it?” I ask. The root cause of Hangover Sunday?

“Drink! Try!” he shoves the bottle in my direction, elbow locked.

I shake my head. The guy on the ground holds the repaired shoe sole steady while Marnie shoves her foot in it.

“One thousand rupees,” he declares. Twenty dollars, or two-thirds of our daily budget.

“No no,” Marnie says. “These shoes aren’t even worth that much.”

Taking the initiative to give herself a fair discount, she hands him some money while I ward off the insistences of the swishing liquid guy until they finally retreat, stumbling and frowning into the depths of the rolling railcar.

A few minutes later, their spot is replaced by a middle-aged lady who pops over from the next section. Indians tend to be rather social, in our experience, and train seat assignments often arbitrary as they flit around the coach chatting with other people.

Her name is Jyota, and she is traveling with her family to Mumbai for her brothers wedding. They came from Bikaner also, where she teaches math and science at the Dayanand Public School.

“What is your favourite thing about India?” I ask her, feeling all journalistic.

“I love the variety of the food and the culture here.” Her smile threatens to escape the confines of her face. “India is rich in heritage, and the ethnic ways differ so much from place to place.”

“What would you change about India, if you could?”

She pauses for a moment and her eyes zig-zag as she watches the landscape change through the window.

“I would like my country to be taken off the list of developing countries, and see my country be a developed one. The most difficult thing to see, for me, is the street children. And the working children.

The topic of marriage comes up, and then divorce, and she is astounded to hear that in Canada, four in ten marriages call it quits before making it to the ’til death do us part’ bit.

“I think the thing that keeps a person alone or separate from their loved ones is a bad attitude.”

It sounds too simple to be true, but then again, humans have mastered the art of convoluting nearly everything into a Rubik’s cube of complexity.

In a culture where it is normal for children, parents and grandparents to live together under the same roof until death jets them off to their chosen Utopia (hopefully), this lady has, if nothing else, some experiential wisdom in familial cooperation. And maybe even familial happiness.

She invites us to eat lunch with her family in the next section, so we shuffle over to sit with them–her aunt and two uncles, her husband and son, her brother and his friend. They pull from their collection of bags a homecooked meal of vegetable curry and roti and achar and other things that are unrecognizable to me. The old uncle with missing teeth teases the eight-year-old son, giggling as though he is not a day older than his nephew; the brother and his friend joke around; the husband pokes fun at Marnie for not finishing her food. The family appears not only to cooperate, but to cooperate with a sense of humour. Happiness?

With full tummies we excuse ourselves to collapse on our train beds and delve into a curry coma. When we wake up, we spend the rest of our journey changing seats, trying to sleep, write, and read as the train clacks along the rails, careening into warmer winds. The guy with the mystery liquid stumbles past us, ogling with his lagging eyes.

We’re serenaded by a chorus of honking snores and sleepy slipped farts, which whirl into a smelly, noisy sensory attack with topnotes of bathroom reek and overtones of frigid window draft. It’s a sleepless night. The train rocks south.