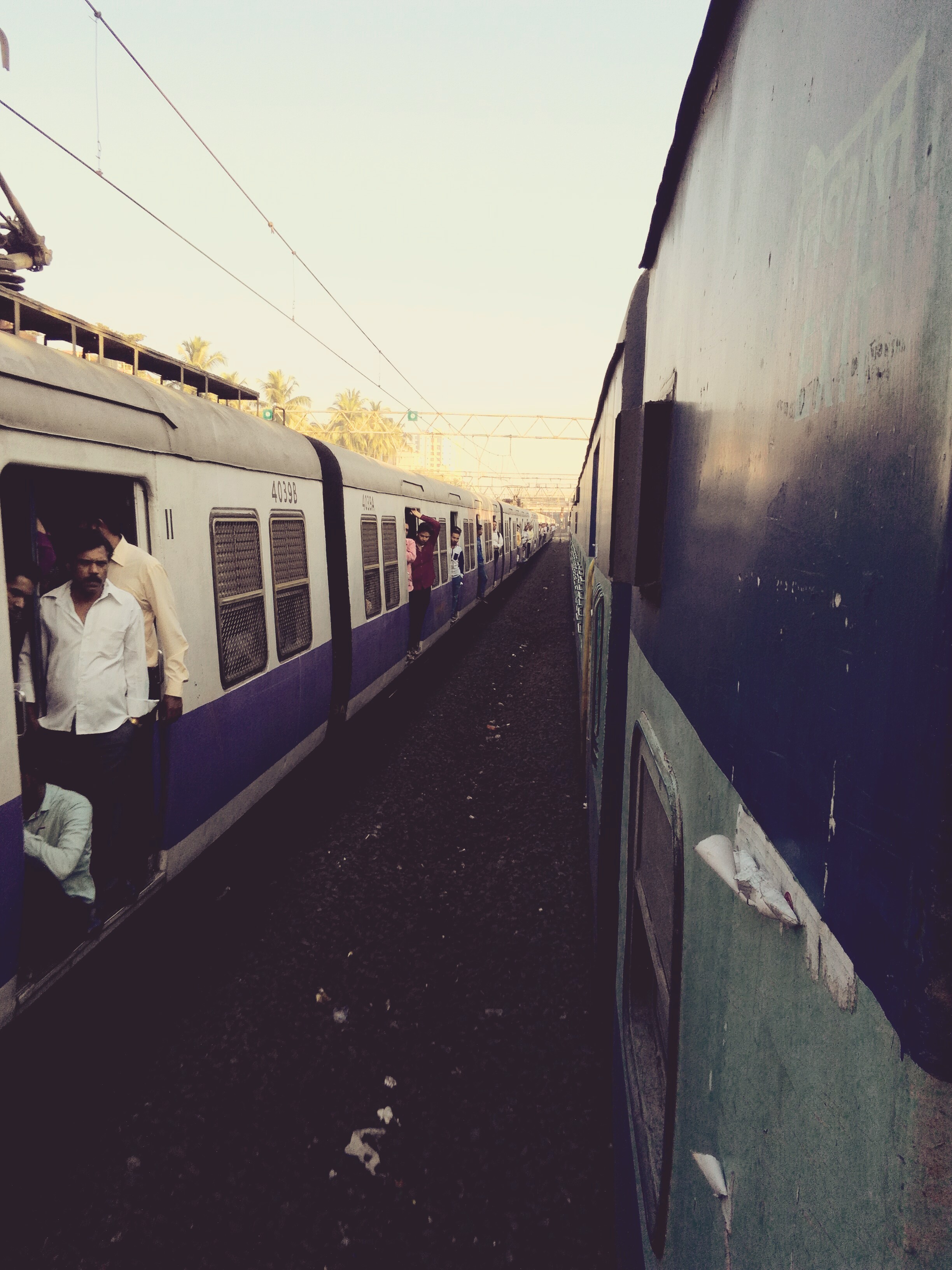 Our train punches in to the City of Extremes. After twenty-six hours of sitting and laying on tiny coach bunks, Marnie and I embrace the ten minute walk to the next railway station with open arms and newfound circulation. Here, we jump aboard the local train bound for central Mumbai. 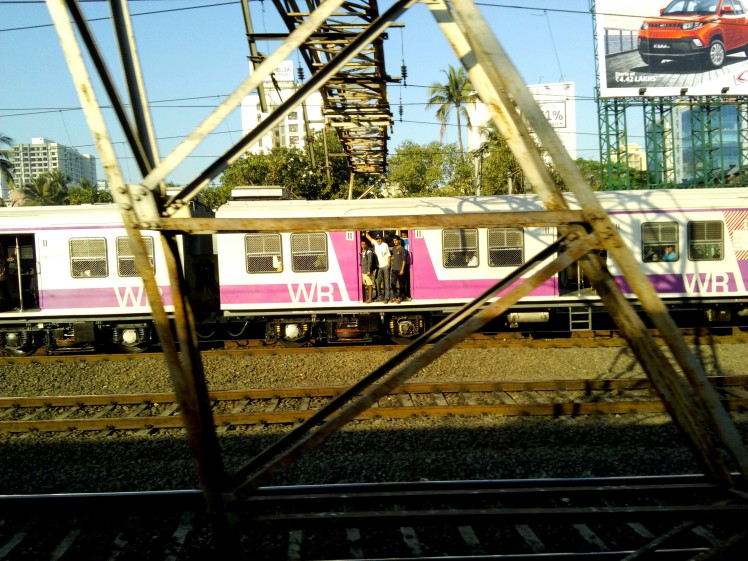 Even from the outskirts, this Indian megacity is palpably different from New Delhi. No cows roam the streets here. And where are all the touts and beggars who saturated the sidewalks of the northern metropolis? 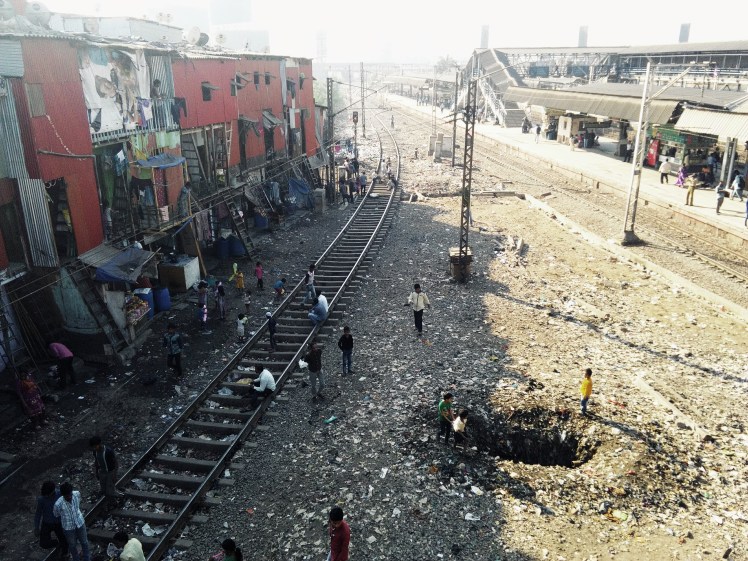 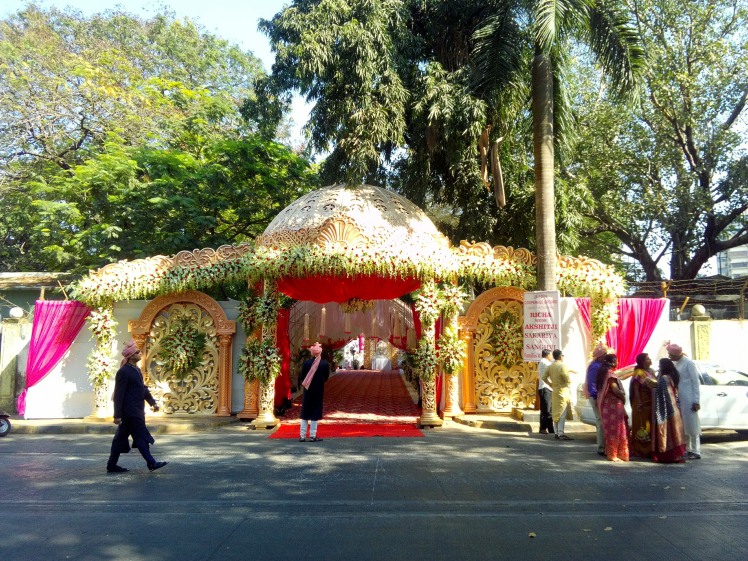 And the people. Unlike the cramped lanes and alleyways of overcrowded Delhi, here, the spacious roads and open areas give the population breathing room. But there are still people. Lots of them. And, perhaps due to Mumbai’s more western influence than its capital counterpart, perhaps due to its balmy weather, foreigners are as abundant as locals.

A taxi grabs us from the train station and zips by the Gateway of India, a monumental basalt archway reigning over the harbour where the Arabian Sea twinkles in the sunshine. I realize how much I’ve missed the ocean, too-toxic-to-touch or not. It’s beautiful here.

The cab driver can’t find our hotel. The road ahead is blocked by a mob of people and film equipment, all shimmying down the street in a prismatic pack, shaking and swinging to the boisterous jingling of Hindi music. Men riff on instruments and a convoy of actors in lurid, sequinned saris and crisp suits parade up the streets, trailed by a shiny, topless automobile, followed by gaffing lights and a cameraman, ensued by a curious crowd of looky-loos snapping photos of the rambunctious debacle, the fabulous charade. It’s dazzling. It’s glamorous. Iiiiiit’s Bollywood!!! 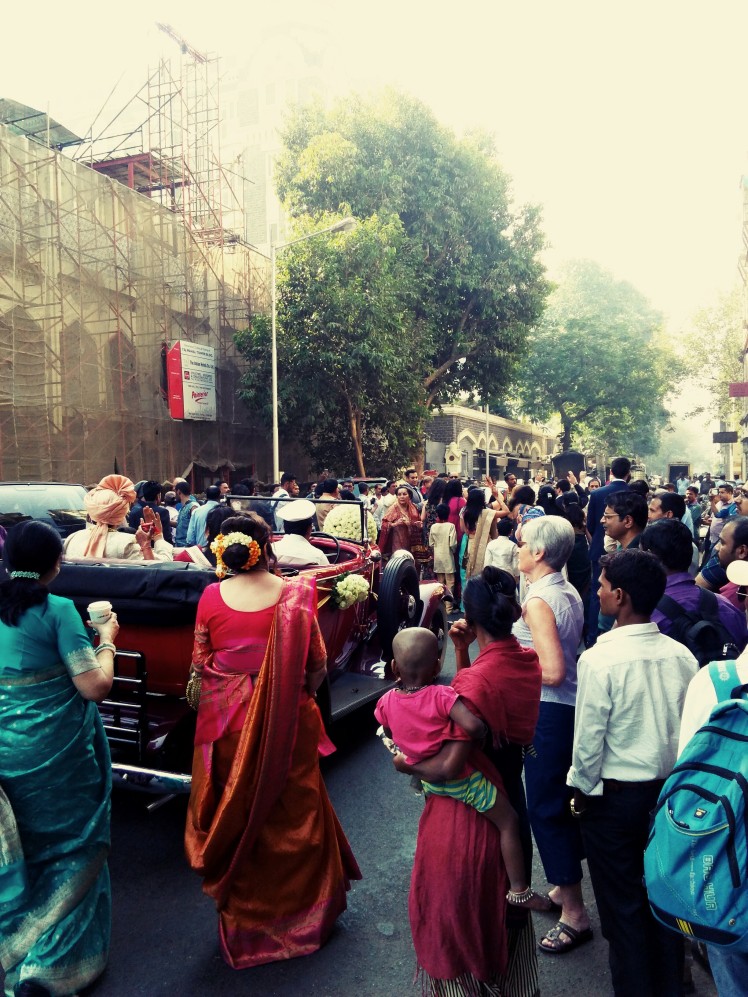 Marnie and I dance past the crowd. We decide to spoil ourselves, slinking past the Salvation Army hostel and checking into a room at a hotel across the street. 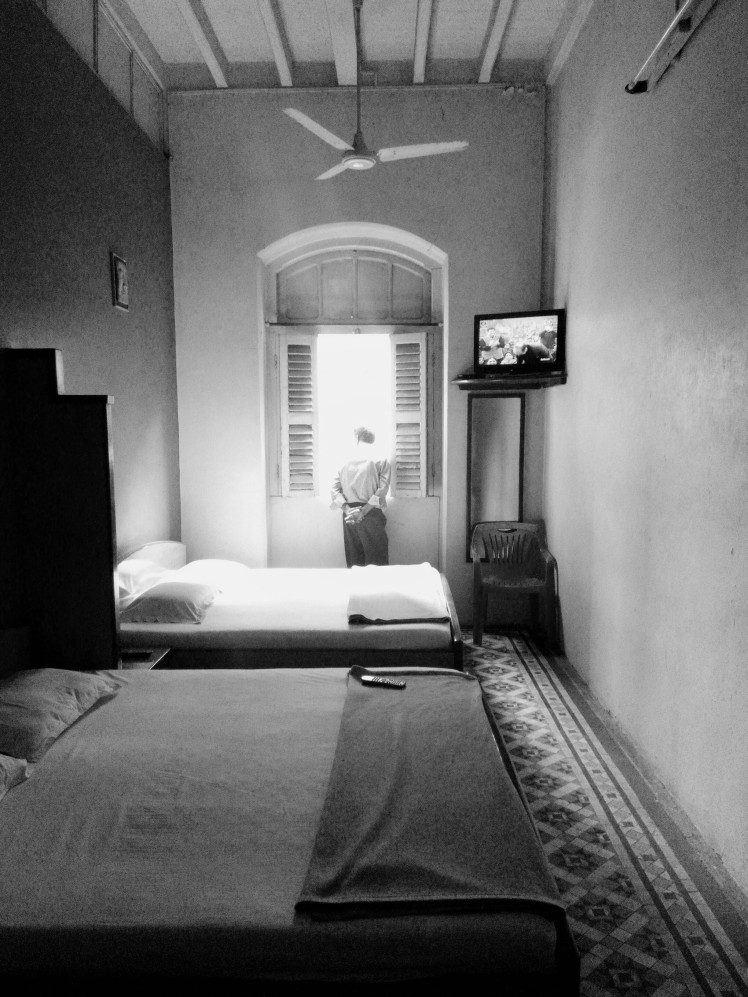 It’s 11 a.m. We’ve barely slept and are desperately in need of a shower. After monopolizing both shared bathrooms on our floor, we head out for a meal–a real meal!–and a beer!

The heat in this city is like a wet blanket. It is hot; it is an extra swipe of deodorant and it is an imminent sunburn; it is the fan on full blast and it is I-shouldn’t-have-worn-this-sweater weather. And it is welcomed with sweaty-lipped smiles and sunscreen-frosted fingertips pressed together in grateful prayer. We are warm. For the first time in . . . weeks? . . we are not cold, and for that, we worship the fiery ball of plasma, we worship Surya, or Ra, or Sol, or the kitchen stove. Whatever will grant our warm wishes. Donning the fewest clothing items we figure we can get away with without offending the general population, we hit the humid streets. Visions of sweaty beer bottles boogie before us like those Bollywood beauties, manipulating us through the heat and through the streets. 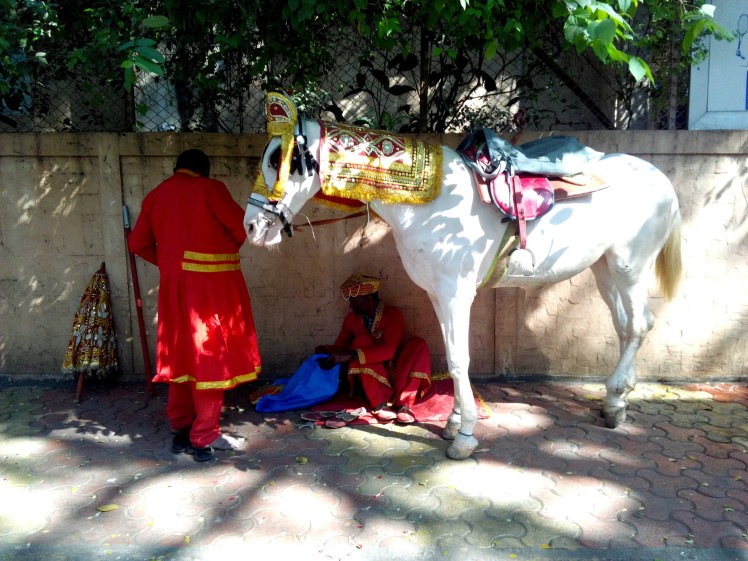 Leopold Cafe is our lunch destination. The watering hole that lubricated the characters of the novel, Shantaram, has become a famous attraction for foreigners. Both Marnie and I digested the book and are hungry to experience it multidimensionally. It is only a couple blocks from our Colaba hotel, and the sign waves to us as we draw nearer, beckoning us forth. The checkered floor and black and white pillars swim into focus, ringing true of the Leopold’s from the 80’s, as I know from the novel. Inside, from the vantage of a little table at the back, I can see things have changed, however. Families from anywhere but India sit around tables slurping pop and eating fries. The staff wear bright matching shirts with LEOPOLD’S splashed across the back in big, yellow letters. There is no cloud of cigarette smoke hovering just above eye level. There are no locals. This bright, wholesome, white-washed establishment is a few decades squeakier than the smoky, moody bar lit up by occasional criminal transactions and Shantaram’s, er, quirky group of friends. I wish there was a cigarette cloud to obscure my disappointment. I want gloom. I want criminal activity. An apple-red shirt stomps into view, and our server pulls out a notepad. I want beer. 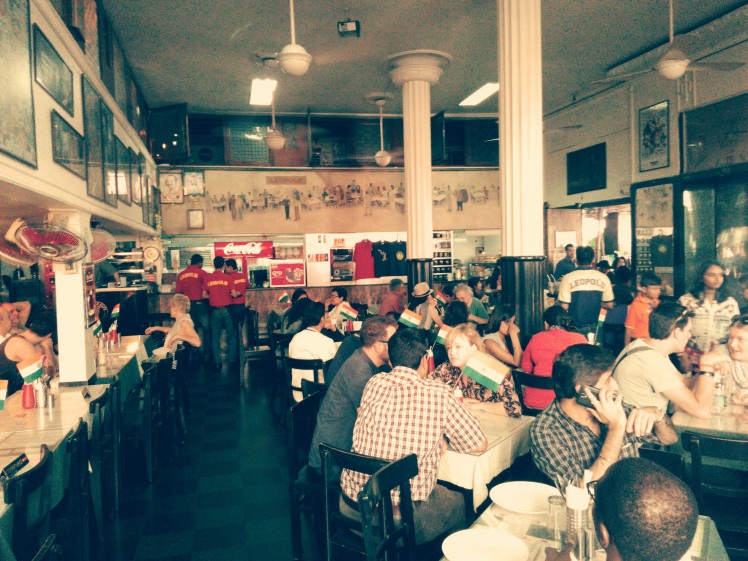 “Sorry, ma’am. No alcohol today. It is Republic Day.”

So we have a coke and a salad–raw vegetables. There are few places in India that feel safe enough to risk eating raw vegetables without contracting some annoying parasite, and this is one of them. We even get chicken in it. This is our second time eating meat in almost a month, and once more, I am a born-again omnivore.

We pay. Someone tipped me off that there is a photo, somewhere in the restaurant, of Gregory David Roberts, the author of Shantaram. I ask the guy at the front desk about this, who peers at me over a stack of Gregory’s giant tome available for sale.

The capitalization of the book’s fame has caused Leopold’s to be a far cry from the 80’s version I’d read about; times change and all that, but it’s a bit of a let down. The photo Leopold hands over, however, is not.

It’s a photograph of Gregory David Roberts, riding a hog of a motorcycle, blonde hair greased back, sunglasses reflecting a Bombay-hot day, the hands of a somewhat plastic-enhanced lady resting on his knees, looking over his shoulder. 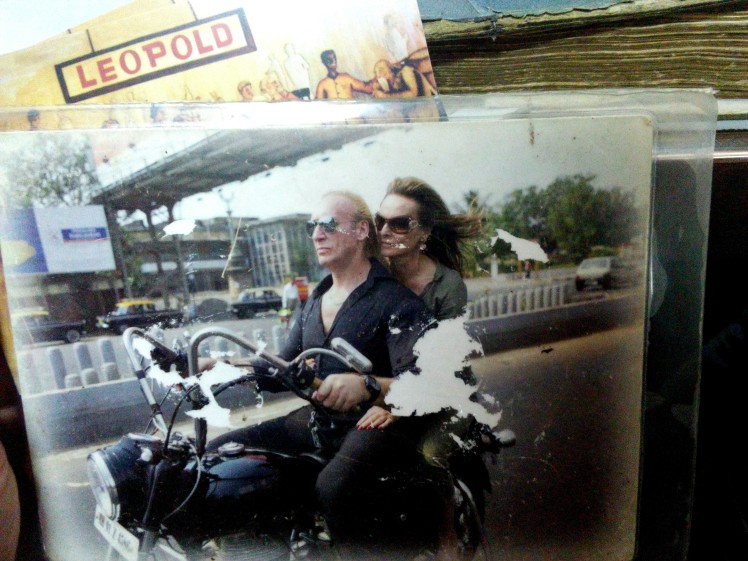 “It was taken about six years back,” Leopold says. “The lady was his girlfriend at the time.”

He’s beefy–those skinny heroin days are long gone–and, all in black, he looks, well, badass. It’s not the sweetly smiling, sunken-eyed Gregory with the big, shiny forehead beaming from the authors photo on the back of Shantaram. Times change, alright.

Coca-Cola brand fridges and offensive staff uniform aside, Leopold’s is riddled with history. That is undeniable. It feels somewhat surreal to be standing in a spot I created in my mind based on the words in a book. That is undeniable. And as much as its exciting, underground atmosphere of decades past has seemingly been replaced with a touristy, family-friendly feel, I am a white westerner who consumed the novel and traveled to Leopold’s; I am one of the tourists at this tourist destination. That is undeniable.

Standing outside the restaurant, a cab driver asks Marnie and I if we need a ride.

“If you can find us beer, that would be great,” I joke.

“But I can get you. Black market.”

We jump in the cab with him, and are whisked around town in an arbitrary direction until finally he pulls over in front of a sketchy building and says he can get beer for us. Eight bucks a pop. We ask him to drop us at our hotel instead. We’re not ones to give up on a mission, however, and at the front counter we slip the hotel manager some rupees in exchange for a bottle of vodka. We collapse, exhausted, on our bed and pour ourselves a drink. Within minutes, both our faces have flared up with splotchy rashes like a couple abstract canvasses splattered with red paint. Our mission has backfired with some violent allergen and we chug water to wash the offending liquor away.

With clean canvasses, we pop over to Cafe Mondegar for dinner–more raw vegetable exploitation!–and grab a cab to a movie theatre in west Mumbai. It is located inside a monstrous supermall and after rushing through the confusing courtyard to the ticket counter, we fatefully snag the last two tickets for the showing of The Hateful Eight. Tarantino in Bombay, baby!

Oh, but in coy modesty, the theatre has taken it upon themselves to child-lock the film–all words of profanity are bleeped out, and every time a character lights up a cigarette, ‘SMOKING KILLS’ flashes at the bottom corner of the screen. Oh, Mumbaian cinema, you demure little prude.

After, we ride the rails back to the central city, Marnie recites Shakespeare as we lunge back to the hotel and then we wash our underwear in the sink before falling asleep.