Day 105: Palolem to Arambol and Back
I beat the sunrise, I notice, stepping out from my room and onto the guesthouse porch. My friends are still snoozing; their towels and swimsuits hang from the clothing lines in front of their rooms. Next door, at the twenty-four hour restaurant, a lone man sits, bags pulling at his eyes, sipping on a glass of rum.

He’s the last customer of the night, and I’m the first customer of the day. A few tables away from him I sit, have muesli and coffee, then go back to my room where I suit up for the day ahead. Long sleeve shirt, sunscreen, helmet. I look at myself in the mirror and try to stop fidgeting. My nerves are almost ready to begin fraying, and the sun has only just peeked over the horizon. I haven’t even started yet.

Black oil has pooled beneath my motorcycle parked behind the guesthouse. Still leaking. I take it to the mechanic, but he doesn’t open until nine. Perched on my bike out front, I endure painful conversation with the Indian guy at the hairdressers next door. Finally, the garage opens, and thankfully Kahn is there.

“I’m taking the bike back to Arambol,” I tell him, taking his advice. My current Arambol rental is having issues, and I have a long road trip ahead. Kahn had taken one look at my bike yesterday and suggested I take it back, then rent a new one from him. “Can you have a Royal Enfield ready for me by tomorrow morning at nine?”

No problem, of course. We shake on it.

I hop on my beat up Bullet and pull it out onto the street, then onto the main road, headed north. As the wind blows in my hair, indecision attacks me like a swarm of killer bees. Old anxiety tactics coup my brain, and I’m suddenly so torn that I can go no further. I turn the bike off the road and down a dirt pathway that lines a sparkling lake. A magical floating tree hovers in the middle of it. 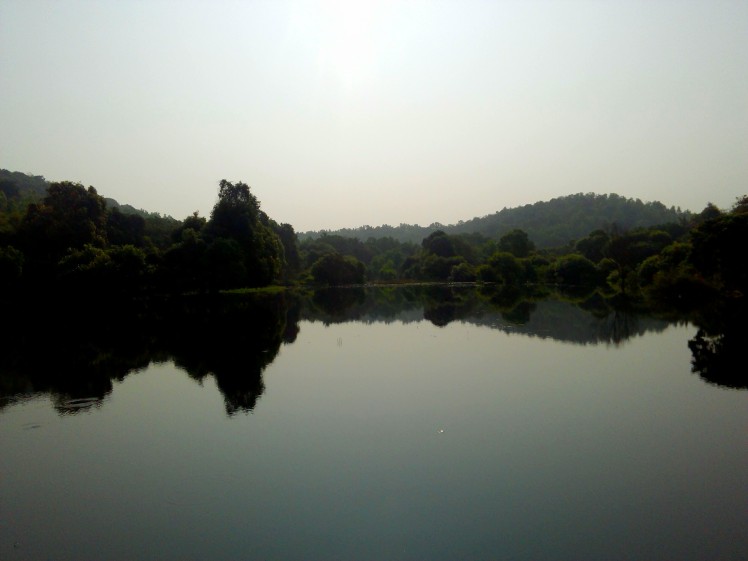 Do I give up on this bike? I run my hand over the dents in the gas tank, the frayed leather of the saddle. For some reason I feel emotionally attached to it, this bike that has, over the course of two days, caused me more trouble than any full-fledged marriage ever could. Giving it back feels like what, I imagine, it would be like to return your adopted child after a few days. Why the hell am I so torn up about this?

There isn’t much time to dilly-dally over such life-changing decisions, however. There is only so much daylight. I wheedle the bike back to the road and turn… south. I can’t give up on this old crony.

The traffic turns into a nasty cold– congested and plugged up.

What the hell am I doing? I think, as I sit in a lineup with no beginning or end while construction crews batter the pavement up ahead. I pull out of the god forsaken jam, and turn around, whizzing down the shoulder against traffic. Spotting a liquor store on the side of the road five minutes later, I park in front and take off my helmet, the better to hear the psychotic argument in my head. A man is sitting by the door, watching me.

Did I not believe Kahn when he told me that yesterday?

I roar back onto the highway, this time with the assertive air of someone who just made a definite decision. Two minutes later I am stalled by another giant booger of heavy traffic. This is the first time I’ve spent any length of time riding by myself. On these busy roads, far from anyone I know and anything familiar, paranoid thoughts of being pulled over by corrupted cops and visions of flipping my bike off an overpass shroud my head as I ride. I focus intently on the road ahead, on the scooters and cars and trucks whizzing past. Don’t think about crashing. Think about driving.

I make it all the way to Margao before getting lost in the whirlwind of roundabouts and overpasses, but soon find my way onto the bridge and finally, spot the sign pointing to Anjuna. 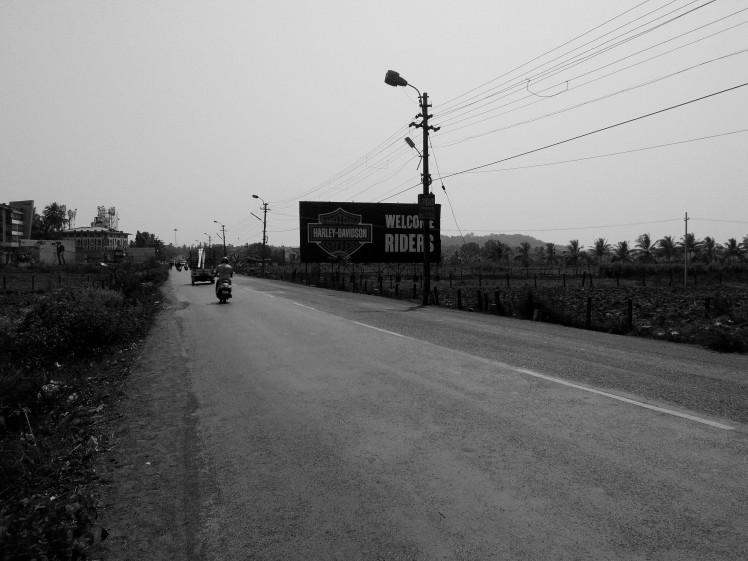 Aviel had suggested stopping for lunch at Eva Cafe on Anjuna Beach, so I turn off at the exit and go through the mass of vehicles clogging the main stretch. The road winds through small buildings and trees until traffic thins out. Asphalt morphs into red dirt and back again, through green jungle until arriving at the precipice of a coastal cliff, the blue Goan water below twinkling like a sheet of sapphire in the afternoon sun.

I turn left like Aviel had said, along the storefronts and through the tunnel of stalls. Eva Cafe is there, the last one on the right, standing like an alabaster beacon upon the rocks. It’s a colonial style structure, bleached white and open, with low wooden tables and seashell ashtrays and beachy lounge chairs. It’s quaint and beautiful. I sit at a table overlooking the craggy rocks and turquoise ocean. The ivory sand of Vagator Beach on my left looks like a giant line of cocaine separating the ocean and the palm trees. 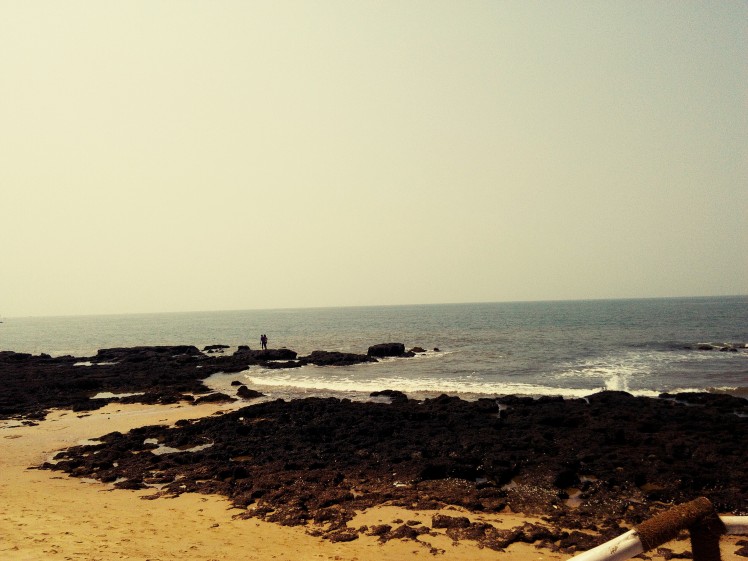 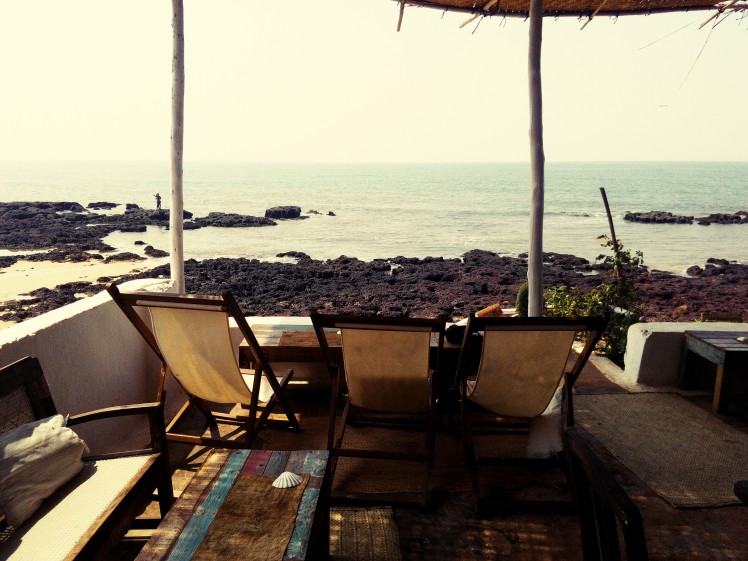 As I chomp lettuce wraps and charge my dying phone (my GPS, my lifeline), even the crashing waves do little to soothe my anxiousness. I feel rushed. I know that unfamiliar side excursions like seaside luncheons take longer than expected, almost always. I leave and, like clockwork, get turned around on the way out, mixed up in the mess of streets. When I finally find the road to Arambol, I rove prematurely down arbitrary streets to wrong beaches as though I have a bad case of vertigo. My GPS lags. Then, a corner I recognize. I go to Chilli’s, my old guesthouse, and pick up the bag I had left there.

“How much is a taxi from here to Palolem?”

“What about a motorbike taxi?”

Still a lot. The staff call a driver to come talk to me. It turns out to be Sachit, the guy who drove my sister to the airport a few days ago. He says that for half price, he’ll take me halfway, where his friend can pick me up and drive me to Palolem from there. I return my dear Bullet to Lucky Enfield shop.

Sachit drives me to Panjim. As we scale a hill at a forty-five degree angle, he scours his phone for pictures of his wife and daughter to show me. Not once does he look at the road as we creep up it like we’re towing a load of cattle, teetering left and right with traffic swooping down over the hill in the other direction.

Sachit ends up dropping me at the bus station in Panjim, where I queue up for a ticket, then squeeze onto the packed bus and into a seat across from a chubby Indian girl with buck teeth who looks away everytime I smile at her. When I blink again I’m in Margao, the screeching brakes waking me from a bus nap.

PALOLEM. I hop on the bus. When night falls, a thick, acrylic coat of inky blackness fills every crack in the pavement, every knot in the trees. A first coat, then a second, until, by 6:30pm, we are no longer driving but sliding through a black hole to nowhere, and the driver spins and jerks the wheel like he’s navigating a land mine pocked war zone. Every couple of minutes, the black hole is pierced with some sharp object and the laser beams of passing vehicles blinds us all momentarily. Then they disappear, until the next time. It feels that at any moment we will fall over the edge of the blackness into a void and be gone forever. The driver doesn’t seem to care whether any of us live or die. In these moments, I comfort myself by laughing.

It’s seven thirty by the time I reach Palolem, alive but shaken, and it’s a good thing I recognize the bike stand on the corner as the driver nearly drives past without mentioning it. I’m too chintzy to pay for a rickshaw, so I start walking with my big stupid bag until an older British fellow pulls over on his scooter.

He drops me near my guesthouse. I walk to my room and notice the doors of my Isreali buddies are both locked. They’re out and about somewhere. I sit on my doorstep with a beer, exhausted. Washing would be a good idea, but the thought of locking myself in the grimy shower stall in my room makes me want to poke my eyes out. Instead, I grab a couple sample packets of shampoo from my toiletries and sprint into the ocean. I strip my hair of its collective filth and scrub the paste of dirt and sunscreen coating my skin with handfuls of ocean floor. Behind me, a curtain falls. I turn around– blackout on Palolem Beach. The stars shine. In the pitch black, I walk back to my place, dress by flashlight, then stroll down the dark strip of beach to a candlelit restaurant. Fish curry.

By the time I reach home again, Aviel, Nofar and Shay are waiting for me– my all-Israeli road trip crew. They saw my shoes out front of my room.

“We’re going for drinks with the guys who Shay bought his bike from. Want to join?”

A couple bottles of wine and a few backgammon games later, it’s time for bed. Nofar and I leave the boys to the billiards and go to our respective rooms.