MUTUAL RESPECT REFLECTS THE ROOTS OF THE NEW GOVERNMENT 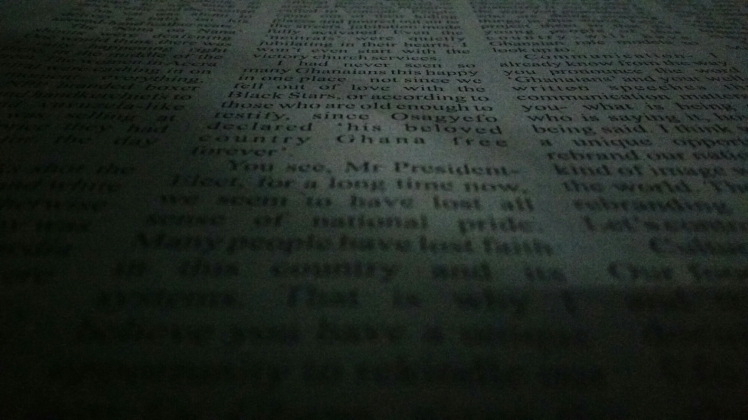 Raucous joy resounded in the streets of Ghana on December 9, 2016. That was the day the NPP leader, Nana Addo Dankwa Akufo-Addo, was announced as the new president-elect. Even supporters for the opposition didn’t seem too upset by their party’s defeat, and in fact, many joined in the celebrations as though they had been rooting for the New Patriotic Party all along.

Speaking with a local of Teshie Nungua, who was gearing up for a Mahama-led government again, he shared his reaction to the NPP victory.

“I wasn’t surprised but I also, actually, wasn’t disappointed. Although I voted for Mahama, I feel like Akufo-Addo has the ability to pull through.”

Belief even from the opposing side!

Nana Addo carries a message that resonates with Ghanaian blood, no matter which colours people bore on election day. It’s not only his message, but his delivery that won the votes of the nation’s majority. A message wrapped in genuity and delivered with positivity– that is what brings people to the polls: hope.

Although his pledges to Ghana that extend over the upcoming four years are optimistic, Nana Akufo-Addo has also served himself up a full plate. This has left some citizens concerned with his ability to deliver these promises. Has the NPP bitten off more than it can chew?

Undoubtedly, the performance of the National Democratic Congress over the last four years has created some skepticism among the populace in their governing body’s ability to please and fulfill their duties as laid out by them.

Outgoing president John Mahama has held goals that are far too scopic and priorities that are not in line with the necessities of an off-balance economy. With focus spread over the infrastructure from such a broad perspective, the very grassroots of that framework, the small communities, delicate agricultural practices and sustainable health facilities, has been neglected. Change happens little by little. Attempting to reconstruct a nation on a large scale is overwhelming, inefficient and pushes aside any allowances to include the intricacies of it’s fabric. It squashes culture and tradition.

Building from the roots via tactics such as providing opportunities for micro-finance in villages, improving farming ability, setting up proper educational facilities and accessible healthcare for all is how to create and build a successful nation– from the ground up. This is Nana Akufo-Addo’s strategy.

The NDC focussed their energy from the top down, which gave them the vantage point– and hierarchical image– of someone from above. The NPP are here for the people, and they will stand with Ghanaians on their level to see what they see, in order to fully understand what the people need and how best to provide assistance.

Mahama has also left incomplete projects from his presidential run, and this has tacked further tasks onto the NPP’s already lengthy To-Do list. One of these duties is attending to the long-standing power crisis, of which Mahama claims is yet still undealt with because it has failed to meet the generation capacity. Ghana needs solutions, not excuses.

The last four years weren’t without drama. Several scandals pockmarked the NDC’s image, increasing their corruption perception index. High inflation levels and little economic growth, paired with an already eight year term in power, made for a sour and, as it turns out, fatalistic cocktail at the polling stations for Mahama and his party on December 7. John Mahama simply did not deliver.

Nana Akufo-Addo has not only outstanding credentials, but an impressive family tree of political heavyweights including J. B. Danquah, a member of The Big Six. Great leadership is running through his veins.

Ample qualifications aside, how does Nana Akufo-Addo’s abilities really stack up in the eyes of Ghanaians? I spoke with some citizens to see what they had to say about the change for Ghana.

A resident of the Labone neighbourhood, a pro-NPP woman, was thrilled about her party’s success.

“I know Nana [Akufo-Addo] is going to make a difference. His father was the Chief Justice! Doesn’t that say it all?”

She wasn’t the only hopeful one.

“I didn’t vote for personal reasons, but I hoped Nana Addo would win. We’ve seen enough of Mahama. Let’s give Nana a try!” said a woman from Kaneshie.

In conversation with a retired major who has seen many a government come and go, who still came out to vote for the NPP on December 7, his words mimicked the feelings of the previous interviewees.

“Ghana is a very peaceful country, you can see. I’ve been to many countries and what we have here is so safe compared to other places in Africa. We still have a long way to go, though, and Mahama has had his turn. He made some improvements, but not enough to make me want to see him govern the country for another four years. Nana Akufo-Addo has a personal history of political endeavours. He was the Minister for Justice during Kufuor’s run. He’s already gone to the trouble of proving he has the capacity and diligence to handle the responsibility of an entire nation, and handle it with grace and proficiency.”
﻿

The population’s faith in the incoming president reflects the president-elect’s own commitment to his nation. Mutual respect is the basis of a principled government. You get what you give, you reap what you sow. This is a concept Nana Akufo-Addo obviously comprehends, and it is apparent in his humble approach to developing relationships and strategies with the communities of the country.

In continuing a personal connection with the people and staying receptive to their needs, and being accommodating and innovative with his decisions, Nana Akufo-Addo can propel the nation forward. The president-elect has ambitious plans for the future of the country, but they are within reach. If the people of Ghana support their leader, their leader can support them.