CHANGE STARTS WITH THE CITIZEN

For The Daily Statesman January 9 2017

At 6:30am, the morning of December 7, 2016, traffic was surprisingly smooth in Accra on the way to Independence Square, considering the crowd of 6000 people expected to attend the inauguration of the 5th president of the 4th Republic of Ghana. Upon reaching the first barrier allowing only vehicles with car passes through, however, the congestion was clearly beginning, and the celebratory madness was already in full swing. Police in white uniforms ushered vehicles through the first barricade, and it was all white, red and blue from that moment on. Not a single person in the packed streets was without some sort of festive wear in support of the newly in-power NPP government. Democracy was the atmosphere; joy was the attitude; change was the theme. Fanatics covered in New Patriotic Party colours from head to toe stood on street corners with Guy Fawkes masks, women were decked out in tailored dresses splashed with the face of Ghana’s new president, Nana Akufo-Addo, men wore their best African wear with festive hats and NPP flags, and scarves and swag of all sorts were sold from vendors at every step. If there was any doubt that Ghana wasn’t ready for change, one second experiencing the jubilation in Accra on January 7, 2017 would banish that feeling. The people of this nation, just prior to the inauguration of Nana Addo Dankwa Akufo-Addo, made it clear that they are indeed prepared for progress.

Surrounding Independence Square were not only hordes of jubilant Ghanaians, but droves of cars, motorcycles, military vehicles and busses driving people in from far off places. Citizens crowded the entrance, choking the gate to get closer to the Center of Change. Once inside, evidence of people having arrived since the previous night to get a prime spot in the seating area was evident; the bleachers were already at capacity and even the fenced area around the inner square was backed up to the stands with onlookers. Behind Independence Arch, the ocean sparkled as if also in celebration, and journalists, media and several distinguished guests had already begun to arrive. 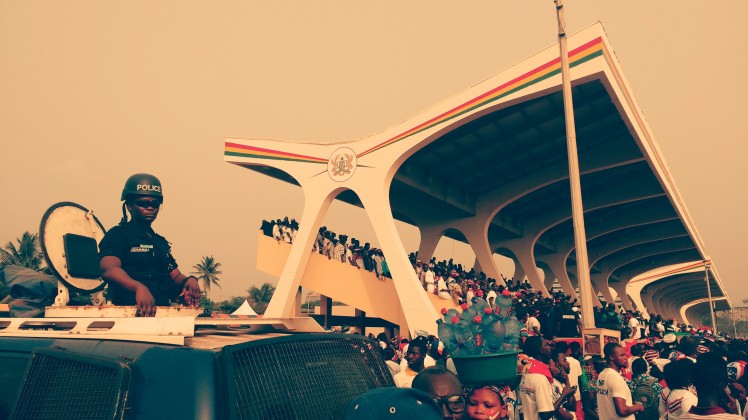 The list of attendees were people with accomplished resumes. This included the guest of honour, President of Côte d’Ivoire, Alassane Ouattara, along with many heads of state from Liberia, Nigeria, Senegal, Togo and Guinea. Also, leaders of Benin, Sierra Leone, Mali, Burkina Faso, Gabon, Zambia, and others traveled far to witness the induction. This show of faces foreshadow the neighbouring support that Ghana can expect from the rest of Africa in it’s democratic journey.

Deafening jubilation greeted the international and national guests as they arrived to Independence Square. Even the line of military personnel and police force could not help but be affected by the infectious attitudes of the celebrants; they laughed, smiled, and pulled out their phone cameras to capture these moments of history.

The din of the crowd reached it’s peak, however, when Nana Addo Dankwa Akufo-Addo entered the scene. The Sound of Change shook the Gulf of Guinea, quaked the nation of Ghana, and resounded through the rest of Africa when the new President walked across Independence Square and towards a future of democracy.

Spectators in the stands, on the grounds, behind the arch, and stretching as far as the eye could see, under a characteristically scorching Ghanaian sun, braved the sweltering heat and the suffocating crowds to experience first hand the inauguration of Nana Akufo-Addo as the new President of the Republic of Ghana. He also ran for president in 2008 and 2012, without success. Apparently, the third time is a charm, and a testament to his persistence and faith in Ghana.

From several points in the arena, the sound of the joyous crowd was so loud it was impossible to hear the speeches delivered from the podium. From inside the Square, however, the message delivered by the President was loud and clear. Also evident was that Nana Akufo-Addo has no disillusions as to the hardship Ghana has faced in the past.

“I suspect that the early nationalists would be disappointed if they came today and saw the level of development we have achieved in 60 years of independence,” he said of the founding fathers of Ghana. “60 years after attaining nationhood, we no longer have any excuses for being poor.”

He also acknowledged the country’s points of progression.

“Since we accepted a consensus on how we should be governed with the onset of the 4th Republic, we have performed more creditably. It is within this period of 24 years Ghana has witnessed a consistent period of development.” Akufo-Addo knows that the citizens have potential.

“I have no doubt that the talents, energies, sense of enterprise and innovation of the Ghanaian can be harnessed to make Ghana the place where dreams come true.”

The crowd obviously agreed, and it wasn’t just by taking their cheers for granted.

“He can do it,” a local man declared, when asked if he believed that Nana Akufo-Addo could deliver on the promises he has made to Ghanaians. That seemed to be the general consensus, as several citizens made very similar declarations about the president’s abilities. 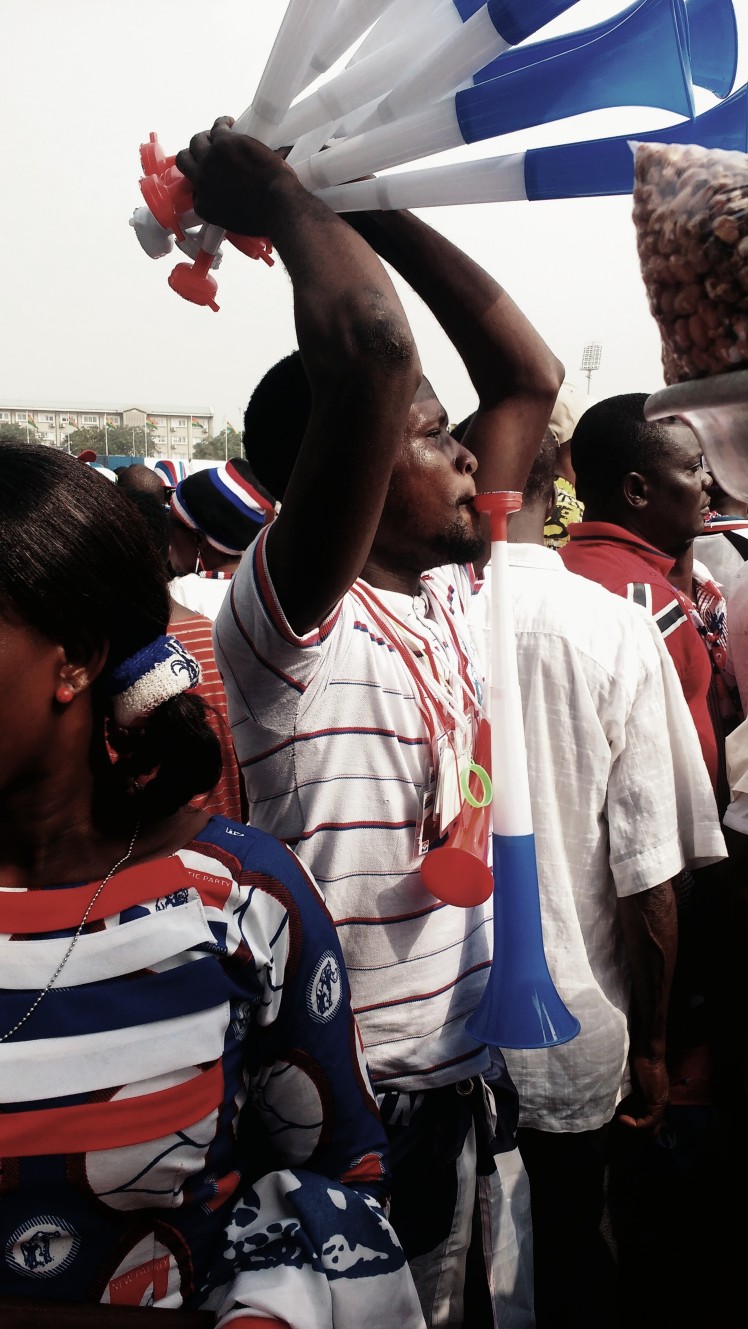 “He can do that. It is very, very easy,” one man said, and further explained his reasoning on how the president can follow through with the pledges made on his manifesto, including the one village, one dam and one district, one factory plan.

“In terms of manufacturing a dam, the dam he is talking about is an irrigation system, not a dam for electricity, for our families to get a supply of water to their fields. In

Ghana, we have dry season and a rainy season. In the rainy season we have a lot of water, but in the dry season we don’t have much. So once he does the irrigation system for us, we can use more water for our crops so we are not going hungry. That is what he is planning to do with the one village, one dam.

“As for one district, one factory, it is easy for him to do that. In Ghana we have ten regions, and each region has it’s resources. We have cocoa, timber, bauxite, gold. In the Western Region, it is possible to do two districts. We have the Western North and the Western South. So, let’s say in the southern region, we can do chocolate there and transfer it to Côte d’Ivoire, Togo, and to other countries. We can employ workers in Ghana here, we are not going to have other workers come and do that. We will do it here, ourselves, so that our people can get money into their pockets and we can have our own industry.”
In the background, the uproar of 6000 Ghanaians continued, representing a much larger fan base of people watching from their television sets the world over. The man then mirrored Nana Addo’s attitude about Ghana having no excuse to be poor anymore.

“For Africans, at times, it can be difficult to send our child to school and we are hoping that Nana will provide free education for us. When it comes to international business, he should promote it so it’s success can be higher, and stabilize the value of the cedi by marketing Ghana’s goods and exporting them abroad. And the electricity issue, our electricity is not good. So we are hoping that he will do everything better here in Ghana for us. That is why we voted for him.”

Decked out in his traditional Kente cloth, Nana Akufo-Addo looked the part of the exemplar African, and spoke from the heart of Ghana. With humbleness he commended ex-President Mahama on the dignified acceptance of his electoral defeat, addressed his concerns of a nation with a rocky history and exulted confidence in a positive future for Ghana. It was a speech showing insight, exuding hope, and affording acceptance of his nation’s troubles without judgement. It is with acceptance that a nation can move forward successfully.

Ghana has been coloured with issues of all sorts, small and large. Large things like corruption within it’s own government and authority figures, such as the police force. Having a responsible, honest figure in the leadership positions of President and Commander-in-Chief of the Armed Forces, it is with much hope that Ghana can now begin to see effective, positive progression in nation-wide issues.

That being said, it is often a mistake to put so much focus solely on the big picture. Real change starts at home. Real change starts small, then grows. It is time to put the focus back on the individual, to rest responsibility not only with the government, but with you, the citizen. The citizens must be held accountable for the success of their country, too.

“No president, no parliament, no government can undertake this mission all by itself,” Nana Akufo-Addo said, addressing the crowd at Independence Square on December 7.

“We must decentralize more. We must devolve more power with corresponding resources to the base of our political system, and to our people in the regions and communities. We must trust the individual and collective wisdom and good sense of our people.”

Nana Addo didn’t merely tell the people his plans, he included them. 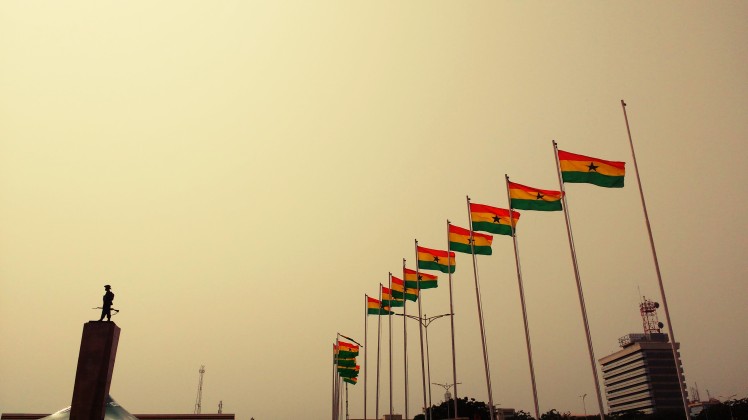 You hear that, Ghana? Take responsibility for your nation, for your community, for you. It starts with your own actions. From small changes, big changes can be born. Then, as a nation, Ghana can grow, Ghana can flourish, Ghana can excel.

Like Nana Akufo-Addo said in his inaugural speech, “Ghana is open for business again!”

Citizens of Ghana, let’s help him make it happen!