Day 112: Jog Falls to Mysore
Shay is rummaging around; I open my eyes. I’m on the last twin bed of a row of three, shoved together so it is like one giant mattress. It’s 6:30 a.m. and I feel like I’m at summer camp.

Suddenly, Aviel is awake, too. I change from pyjamas to pseudo-motorcycle gear– stretchy leggings, a long sleeved beach cover up, and laceless, fabric shoes. At least it’s all black.

Before we know it, the bags are strapped to the motorbikes and the engines are tut-tutting, warming up for the road ahead. I wipe the dew off my bike seat with a towel. It’s a misty morning, and chilly. The temperature has changed considerably since we left the oceanside and headed into the mountains. I wrap my purple-and-red pashmina around my shoulders like a blanket.

By 7 a.m., we’re off. The air is cold, but refreshing. The road winds around and up, then down and around again. I’m a kid on a rollercoaster, cackling to myself like a motorcycling maniac. It must be the cool weather, the lack of unforgiving sun; I feel recharged.

The mist becomes a dense fog, then dissapates with each bend we ascend, so that the orange sun percolates through the drizzle, splashing down on us like warm, freshly-squeezed sunshine juice. The road descends, the fog thickens once again and we gear down as the landscape– the boundless thicket of trees– morphs into a ghostworld split in two by the highway we ride on. Then the pavement levels and traffic appears, all busses and trucks with their tonnes of cargo, and the chill is chipped away at by the kilometre, chiseled by a sun that gains strength with every passing minute. 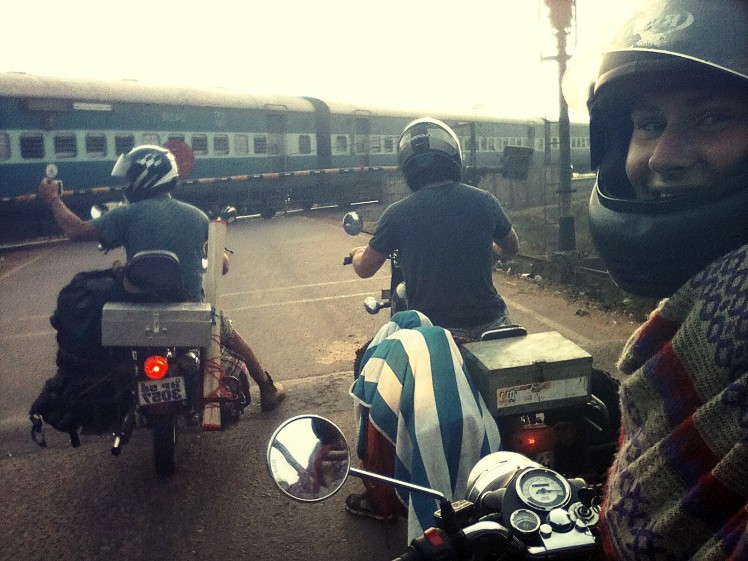 The three of us stop at a roadside shack where a man is cooking omelettes on a gas stove. Aviel, Shay and I order one each, followed by chai and random bags of nuts and biscuits. 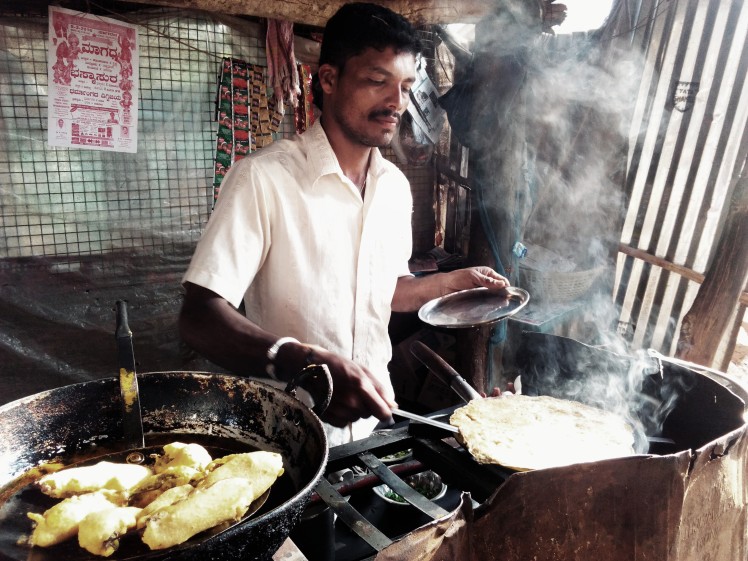 Back on the bikes; time to kilometre crush. It feels good to put distance between someplace and another. Between there and here. Between then and now. Between anything, really. I’m thrilled about my full-coverage ‘motorcycle apparel’, mostly because it has become so potently warm that even the 80km/hour, motorcycle-simulated wind is kin to someone breathing hot air down our backs, and this intensifies my awareness of how, left uncovered, my transparent skin would match the complexion of a freshly plucked chicken. Unidentified flying insects zip into my helmet and get jammed in my ear. Somehow I keep enough composure to avoid careening into the ditch, and scoop them out with one quick, well-coordinated flick of the finger.

Our little bike gang stops at a fruit market to drink raw lemon-ginger sugarcane juice. We have a spontaneous photoshoot with a bunch of excitable guys cooking chicken. If I didn’t know better, I would have thought we were big in India.

“If you were alone, you would have gotten raped,” Aviel says as we walk out of the market, another of his classically boorish comments.

Between dodging water buffalo and sweeping through dusty villages and crackly earth sprung with sharp palms and whimsy banyans, my brain has alone time, its solitude magnified by the confines of my helmet. The visor is in the ‘up’ position keep the thoughts well-ventilated. They need oxygen, too.

I’m enjoying my time with Aviel and Shay– we’re a little gang now– but… I wonder… Is following them to Kodaikanal a smart move? It means my original plan of going to Ooty and then heading back to Palolem alone is out, which also means that when I leave Kodaikanal, I will be 850km from my end point. That’s a lot of solo riding. I’m happy on my own, but, as a relatively inexperienced rider, 650km of partnerless motorcycle riding from Ooty would already be a long stretch. Well, what is 200 more, really?

We stop somewhere a patch of shade has decided to rest.

“I can’t find my sunglasses.”

Aviel holds out a pair of cheap cream frames studded with fake gems.

“You wanna wear these?”

I look like a quirky senior citizen from upstate New York, but hey. No squinting. They go well with my Vietnamese facemask. Now, only the tops of my feet and hands are exposed to the sun, and even that is too much. I can feel the tops of my hands tightening, maybe bubbling.

We look at the map.

“So, Tarikere is where we stop next,” Aviel says.

We mount our bikes and drive into the next town. It’s a biggish one, with veins of roads venturing off the main artery. As usual, Aviel leads and I take up the back, with Shay sandwiched in the middle. After a few minutes, I follow his cherry-red Bullet to the side of the road. Aviel has disappeared from sight. We turn back to where the road split. No signs of the Jewish mop-top and his clunky Royal Enfield anywhere. Shay and I creep forward slowly, scanning for a big bike topped with our friend. Nothing. We stop.

“Maybe we should go to Tarikere and wait for him there. It’s too busy here.”

Shay nods. We reach the town and stop at the first restaurant we see. I chug water, Shay looks at his phone. After a long time, his eyes widen.

Shay laughs his deep chuckle, like he always does, no matter the situation. We sit around in the restaurant for another half hour, but Aviel isn’t answering his phone.

“I’m messaging him to say we will just meet him in Mysore.”

It’s the best idea. We’ve really lost him now and that is the only place we all know we want to end up today.

We drive, and drive, and drive. I can feel the skin atop my feet slowly charring beneath the wrath of the sun. The back of my hands have little white dots on them. Can’t be good. Obviously, Shay is feeling it too, even with his dark Isreali skin. He pulls over and gets off the bike to rub sunscreen on his singed epidermis. A motorcycle approaches in the distance.

“Imagine he just showed up?” I say.

The bike passes. Definitely not him.

We revel in the shade for a minute, staring off down the empty highway. When I swing around, a beater of a Bullet is ripping towards us, and none other than our long-lost Aviel steers it onto the shoulder and comes to a halt 30 metres ahead. There is a lot of yelling and screaming as he walks towards us, his face invaded by a toothy grin.

After we lost each other, Aviel backtracked for 30 minutes until reaching the place we ate the omelettes for breakfast. With no way to reach us, he decided, “fuckit,” and hit the road in the direction of Mysore. He even stopped to get a SIM card for his phone to get in touch with us, but the shop wouldn’t sell it to him. Instead, he stopped at a restaurant to use their wi-fi, but never received the messages we sent for whatever reason. Anyways, the crew is now reunited.

We hit the road as a trio once more, later stopping at another market to guzzle more freshly pressed sugarcane and pineapple juice, eat fried potato balls and buns filled with spicy green sauce. I dump cupfuls of water over my head to the amusement of the market vendors, who laugh and point. 100km to go now. We go and go and go and finally, the sun starts to chill out, the dry landscape stretches out forever in swarms of palm trees and sometimes, mountains poke through the earth’s surface, their pointy tops making me feel as though I’m rolling through a life-size Dr. Seuss pop-up book. Monkeys squat on the side of the road; cows poop on the shoulder; women swathed in lurid saris lead their goat herds on an indefinitely long walk. Children waggle their arms at us as we drive by. We waggle ours back.

FINALLY. Aviel, Shay and I whip into Mysore. It’s a big city; the sun has now long since set and in the dark dazzle of dusk, the street and traffic lights stretch and convolute into a kaleidescope of glowing, city-slickin’, kinetic objects. My eyesight is crap. It’s fine in the day, but at night time, the glare of lights creates a confusing world. When we pull over to regroup, I tell my biker boys to drive slowly so I can follow them in a semi-non-dangerous fashion.

After a tedious thirty minutes, we find a hotel and pile onto the ivory tile of the lobby. One of several staff members at reception leads us up the stairs, showing the rooms available– one without windows, sporting a barracks-type fold out cot and tiny reading light. It’s an odd contrast to the tiled hallways and big wooden doors, which open to reveal dingy, unwelcoming rooms. The next door our guide opens exposes a large room into where the white tile has continued, a big, plush bed, bright lighting and heavy curtains on the windows. It’s like a five star room cut and pasted into a single star hotel.

After another mattress has been set up on the floor and each of us has showered the mixture of dirt, sweat and asphalt off, our trio heads downstairs to get a rickshaw.

“Let’s go get drunk!” I shout, and Aviel and Shay have no qualms.

The rickshaw driver agrees to let Shay in the drivers seat and, with his giant frame filling the inside, head stooped beneath the roof, it looks like the funny uncle hijacked his nephews Fisher Price car and took it for a joy ride.

Reaching the restaurant the actual driver suggests, we climb a set of stairs to a rooftop patio. The rickshaw driver joins us as we rage through several beers and a healthy portion of curry, all the while teaching us phrases in Hindi.

I’m pretty drunk by the time we leave (mission: accomplished), and when we reach our hotel, Shay lags behind, staying in the lobby to make use of the wi-fi.

Aviel and I stumble down the hallway, poking our heads into the weird, dilapidated suites until ending up in a gross, brown laundry room. He corners me in the soap cluttered cubby hole and lunges his face in the direction of mine. Our lips meet for a few sloppy seconds until I clumsily push him back.

The two of us make it to our room ten metres down the hallway and burst through the door, where I immediately flop down on the mattress on the floor. Aviel sits on the bed.

“Was that weird for you?” he says.

Our conversation continues on in that fashion, with odd silences and one of those I-don’t-want-to-mess-up-our-friendship talks until I exit the situation by laying down and falling asleep on the floor mattress, still wearing my long black dress and a layer of beer-scented sweat.